One of the favorite Bible stories in the Middle Ages was that of Dives and Lazarus, sometimes called "the rich man and Lazarus" in modern translations.  In the early modern period it became an English Christmas carol, and Ralph Vaughan Williams wrote a series of beautiful variations on the tune.

There are several different men named Lazarus in the New Testament.  These days most people will think of the one whom Jesus brought back to life after he had been dead and buried three days--a clear prefiguration of the Crucifixion and Resurrection.  This Lazarus gave rise to the urban legend of the Wandering Jew, the man who could never die because he had, after all, already died once, and who has spent the last two thousand years wandering around.

This story also has the classic line (in the King James version) of one of Lazarus's sisters objecting when Jesus wanted her dead brother dug up--"But Lord, he stinketh."

Today we are talking about a different Lazarus.  This one appears in a parable. 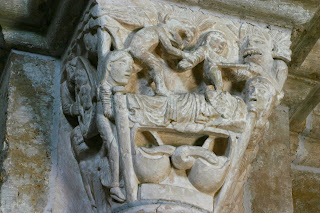 He was a poor man lying at the door of Dives, a rich man.  Dives refused to give him even a crumb from his table, even though he had far more than he or his guests could eat.  Instead Dives set the dogs on Lazarus and, when the dogs refused to bite him, set his thugs on him.  But they couldn't touch him either.

Now I myself would have thought maybe there was some sort of message here, but Dives just laughed it off.  Imagine his surprise when demons seized his soul as he died.  All his wealth did him no good.  The twelfth-century carving pictured above, from the abbey church of Vézelay, shows him on his death bed, money bags stacked underneath, and the demons grabbing his soul with great enthusiasm as it emerges from his body.  His wife, on the left, is understandably horrified.

Poor Lazarus, in the meantime, also died (probably from starvation), but he went straight to heaven.

The remarkably clear message from this was that it was the responsibility of the rich to help the poor, as I discussed in more detail earlier.  The well to do, including both noble households and monasteries, would routinely give leftover food out at the back door to poor people who gathered there.  They were quite deliberately avoiding the error of Dives.

In a broader sense, the story was a radical rejection of the value of worldly wealth and power.  Even though there were plenty of wealthy and powerful people (including church leaders) in the Middle Ages, the parable of Dives and Lazarus, frequently represented in church decorations (as here), was a constant reminder that wealth was not going to matter a bit when it came to your soul.

We tend to think of medieval houses as built of stone because most obvious surviving medieval buildings are stone.  But these buildings are churches and castles for the most part, not regular people's houses.

Wood was the most common building material in the Middle Ages, as it still is in the modern US, because it was fairly cheap and easy to work.  The earliest castles were built with wooden palisades, and palaces were largely built of wood.  In Scandinavia, churches too were often built of wood.

But in the twelfth century wood started becoming scarce.  As the population grew, forests were cut down for new crop land.  Efforts were made to protect the remaining forests, for hunting or for pasturing pigs.  So big beams became hard to find.

Ordinary people's houses were built mostly of what is called wattle and daub, small pieces of wood providing a framework, filled in with a combination of straw, twigs, mud, and maybe plaster (sometimes dung).  If one thinks of what we now call half timber, wattle and daub was a rougher version--most existing half timber structures were built in the fifteenth century or later.  If the whole thing was whitewashed, it wouldn't look too bad.

Wattle and daub was not strong enough to support a multi-story house, so most medieval houses would be two stories high at most.  The floor would be dirt; conscientious housekeepers would try to keep it (vaguely) clean by constant sweeping, which meant that the floor might end up several inches lower than the ground outside.

If there were nearby marshes, thatch (made from reeds) was a popular choice for the roof.  A well made thatch roof will last for over thirty years, although nowadays thatchers say that acid rain has resulted in weaker, less long-lasting reeds.  The problem with thatch is that it will burn, so in towns those constructing houses were encouraged to use tiles or slates instead.

Starting in the twelfth century, a few wealthy townspeople might build a house in stone.  Such a house was far more expensive but much longer lasting.  It could also be built higher.  Such a house might have a flagstone or tile floor, rather than dirt.

In the late Middle Ages, more and more people started building in stone.  One of the effects of the devastating Black Death of the fourteenth and fifteenth centuries was that the population was severely reduced, leaving more wealth for the survivors.  Most European stone villages took the form they have now between the fifteenth and seventeenth centuries, although there are still some twelfth-century structures mixed in. 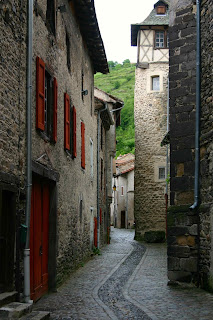 In the country, the barn with its animals was usually built immediately adjacent to the farmhouse (see more here).  Barns became stone at the same time as the farmhouses.  A medieval stone barn was built as a series of long, narrow open areas with stone walls in between, which made it easy to span the open areas with short boards, for the upper story (hay or grain storage).

Most medieval houses did not have fireplaces.  Instead they had a fire pit, the smoke from which made its way out through small holes near the eaves.  Fireplaces really only came in during the thirteenth century.  They were more expensive and much less efficient in heating the place, so they generally were found only in castles or palaces.

We take calendars for granted.  Doubtless there is one hanging on a wall somewhere near you.  We write appointments on the calendar--"Billy to the doctor at 4:15 on the 21st."

Medieval people had the same basic calendar we do (365 days spread over 12 months, the same ones with 30 or 31 days, February always gets shorted but does get an extra day every 4 years).  This is and was your basic Julian calendar.  But, just as medieval people thought about telling time differently (as I have discussed earlier), so they thought of calendars differently. 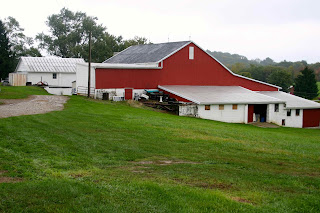 Instead each day of the month would be listed underneath the others.  Next to it would be the saint whose special day it was, whose anniversary would be celebrated that day.  Although modern Catholicism has a saint for every day of the year, a lot of medieval calendars wouldn't have anyone special to commemorate on many days.  Unusual events might also be noted, such as an eclipse or a flood.

One of the most important things to note on a calendar was Easter.  In the Middle Ages, Easter was by far the most important religious holiday, unlike today when it has to take a back seat to Christmas.  Easter is now (as then) the first Sunday after the first full moon after the Equinox.  As you can imagine, it moves around a lot.  Exactly when the Spring Equinox falls is open to discussion, and do you count the first full moon as the day whose evening sees it rise or the following day?  In 2016, Greek Orthodox Easter fell in May, a month after Latin Easter.  Medieval people had all sorts of charts and tables trying to show when Easter would be next year.

We assume the new year starts in January.  Some medieval people did as well.  But depending on the region, the new year might start at Christmas, at Easter, or even at the Incarnation (March 25, nine months before Christmas, when Mary became pregnant).  Easter was the most common, which meant that if Easter was early one year and late the next, a "year" might have almost two whole Aprils in it, one at each end.  Sometimes, especially in Italy where the cities were in fierce competition, one could be off by one or two years just by walking a short distance from one city to another.

We count days of the month by the day, 1st, 2nd, etc.  Medieval people, like the Romans, were more likely to refer to the kalends or the ides.  The kalends was the 1st (it's where the word "calendar" comes from).  So a medieval document might be dated by "the second kalends of June," meaning the next to last day of May.  Ides fell in the middle of the month (Caesar was famously assassinated on the Ides of March, or March 15).