Trees in the Middle Ages

Europe probably has more trees now than it had in the thirteenth century.  The last of the old-growth forests are long gone, but a lot of less-fertile agricultural land has been allowed to return to woodland.  With modern hybrid seed and fertilizers, far more food can be grown per acre than was the case 800 years ago, meaning that less land needs to be cultivated even with the increased population. 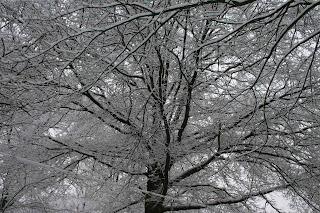 Trees were very important in the Middle Ages, even though the normal reaction to wilderness was concern and even fear (unlike today's frequent embrace of wilderness as soul-cleansing).  Trees were necessary for beams for churches--the fire at Notre Dame that destroyed the roof burned up 1300 beams from twelfth-century oaks taller than almost any tree now found in Europe.  Because heating and cooking was done over wood fires, firewood was constantly being gathered (another reason there were fewer trees then than now).  The forest was also a source of food, nuts, berries, mushrooms, and the like, and acorns were prized as food for the pigs that essentially ran wild while getting fattened up.

Timbers were needed for houses of course as well as for churches.  Although most of the buildings that survive today from the Middle Ages are stone, wood was also heavily used at the time, being cheaper and easier to use.  Ordinary people couldn't afford (and didn't need) massive beams, but they needed wood to make a framework, often filled in with clay, rubble, or plaster.

A lot of things that are now made out of plastic or metal were then made out of wood, including furniture, storage containers, fish weirs that would trap fish, poles for vines to climb on, and the like.  Trees were often pollarded, that is had branches cut off so that it would produce a lot of slim young branches, which were useful for things like poles for the vines or fish weirs.  Although pollarding has essentially stopped now, if you look at Impressionist paintings of trees you will notice they still, in the nineteenth and early twentieth centuries, seemed to have had an awful lot of small branches growing out of a thick trunk.

Trees were also used to make charcoal.  Charcoal will burn a lot hotter than wood, and it was thus needed to be able to work iron or to blow glass, before the days of the modern oil-fired blast furnace.  Charcoal burners would level a large patch of forest and then burn the green wood slowly, so that it would burn down into charcoal rather than all being consumed.

Europe's trees in the Middle Ages were mostly the same mix seen today.  Olive trees were valued along the Mediterranean.  Evergreens were found at all high elevations and were tapped for resin.  Chestnuts prospered in the woods, as did beeches, ashes, and oaks.  Orchard were planted with apples and other fruit trees.  Trees often took on holy or at least mythic significance.  The Crucifixion was often described as Jesus hanging from a "tree," and indeed it was sometimes said that his cross was made from the wood of the Tree of Knowledge from which Adam and Eve unwisely ate.  In Norse mythology, there was a great "world tree" (named Yggdrasil, their trees got to have names) whose branches spread out over the gods, humans, and giants.

For more on the medieval environment, see my ebook, Positively Medieval:  Life and Society in the Middle Ages.

Posted by C. Dale Brittain at 8:47 AM No comments:

There were a lot of wars in the Middle Ages.  (The same thing of course could be said about the twentieth and twenty-first centuries.)  They were not nearly as destructive to infrastructure as modern warfare, and a lot of them were small and local, but they were certainly hellacious both for participants and for innocent bystanders.

One major distinction between medieval and modern warfare is that the medieval male aristocracy defined itself militarily by the twelfth century.  That is, anyone who was rich and powerful also wanted to be seen as a warrior, specifically a knight, someone who fought on horseback.  This is unlike today's wealthy men, who seek various ways to avoid having to go to war. 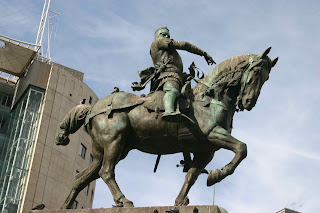 Gunpowder and cannons started being used in warfare in the fourteenth century, but before then the chief weapons were swords and lances.  Lances were used to knock other knights off their horses once cavalry began to dominate warfare.  Swords were used to slash and kill--the fencing you see in Three Musketeers movies is post-medieval.  You could also kill people with arrows, although armor provided a lot of protection.  Because archers killed from a distance, a bow was considered a coward's weapon.  This did not keep all medieval armies from marching with a contingent of archers.

Most battles were fought by the infantry in the early Middle Ages, and at least theoretically all free men were supposed to be ready to march off to war if needed.  The Roman army had been a foot-soldier army, and this preponderance of infantry continued until the stirrup made horseback fighting viable in the tenth and later centuries.  Major battles were won by the infantry, and in the battle of Hastings of 1066, when the Normans conquered England, the Anglo-Saxon infantry came extremely close to winning.  (They probably would have won if they hadn't just fought and won a battle in the north of England, then marched south very fast to face the Normans.)

Cavalry then dominated warfare throughout the twelfth and thirteenth centuries, but with the spread of cannons in the late Middle Ages infantry again became very important.  They weren't wanted for their fighting skills so much as to be cannon fodder, to march against the cannons, get shot and die, giving the cavalry and the archers a chance to charge while the slow reloading was going on.  (There were no rifles or handguns for centuries to come.)

In extended wars (like the Hundred Years War), the armies lived off the land, burning crops and devastating the countryside.  But for smaller wars, especially in the twelfth century when the Crusades were still seen as a viable way to be a warrior without killing Christians, there was at least an intermittent effort to avoid attacking the helpless.  For the peasantry, however, war was always awful.

A lot of battles involved castles.  Castles, like knights, first appeared in the eleventh century.  They were primarily defensive, and castle architecture tended to develop just fast enough to keep ahead of advances in siege technology.  Many castles were never attacked at all, and those that fell usually fell due to betrayal or to the garrison being starved out.  Castles could also be used as staging areas for sorties and attacks. 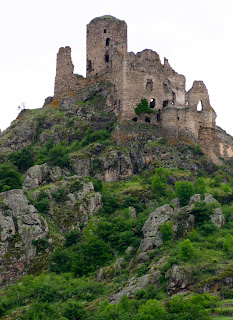 Naval battles occurred in the Middle Ages but were rare.  The Mediterranean was notoriously unpredictable, and few other than Vikings would venture far out into the Atlantic.

For more on medieval knights and warfare, see my new ebook, Positively Medieval: Life and Society in the Middle Ages.

Posted by C. Dale Brittain at 3:25 PM No comments:

The word "orthodox" makes one think of Greek Orthodoxy or Russian Orthodoxy (and there are other versions of Christianity with Orthodoxy in their names), but the word actually means correct religion, as opposed to heresy.  Heresy is incorrect religion.  How do you tell the difference?

There is and can be no absolute guide.  You can tell which was the true religion by who won.  Obviously God wouldn't let the wrong guys win, everyone said (and says).  Alternately, however, the Bible talks about "when two or three are gathered in my name...." so maybe the tiny minority is right and the self-styled winners are wrong and going to hell.  Guess we'll find out!

Heretics are specifically people who should know the true religion but have gone seriously astray.  So different versions of Christianity can (and often do) label each other as heresy.  Latin Christendom and Greek Orthodoxy excommunicated each other in 1054 and have only recently started getting back together.  (Protestants and Catholics have also decided that the other side isn't really a bunch of heretics.  Or not too heretical.)  So Christianity considers Islam not a heresy but a different religion, and Muslims aren't heretics but infidels.  Pagans, those who believe in multiple gods, are also not technically heretics.  This has never stopped the word "heretic" being tossed around a lot for anyone someone disagrees with.

Early Christianity had a lot of heresies.  Some of the most serious were so-called Christological heresies, arguments over the nature of Christ.  Was he just an inspired human?  Was he God in disguise?  Did he really die on the Cross or, if he was God the whole time, was it just a big charade?  If he was an inspired human who did rise again from death, should we pray to him rather than directly to God or is that a big mistake?  Are God and Jesus both gods, separate ones--and what about the Holy Spirit?  The efforts of the Council of Nicaea (325) to define the Trinity, one God in three persons, Jesus both fully human and fully divine, tried to settle the matter and just led to a lot of new heresies.  Most only ended with the rise of Islam in the seventh century, when a lot of territories that had been Christian under the Roman empire instead had Islam as their dominant religion, making a lot of the arguing irrelevant.

Other early Christian heresies included pelagianism, the idea that you could save yourself by being as good as you possibly could without needing grace (via the sacraments), and donatism, the belief that sacraments (which you needed) could only be validly administered by a pure priest, so if the priest had secretly sinned they didn't count.  These were also more or less wiped out once Islam gave people more things to think about than theological niceties.  Pelagianism had been especially strong in Roman Britain, until the arrival of the pagan Angles and Saxons ended that issue.

Another serious heresy was manichaeism, the idea that the universe was locked in a battle between absolute good and absolute evil, which neither would ever win, and that the spiritual world was good and the physical world evil.  There is a fair amount of dualism (the idea of two equal powers fighting it out) in orthodox Christianity, but this is heresy.

A lot of early Christian doctrine was worked out in response to heresy.  Someone would announce a new insight into religious issues no one had really thought about much, a church council would meet, discuss, decide it was wrong, and settle on an official doctrine of the opposite.  (This is how for example it was decided that the Christian Bible would include the Old Testament, the Jewish Bible, even though Christians felt they had "moved beyond" a lot of it.)  Thus heresy (and the reaction to it) helped define orthodoxy.

A version of Manichaeism took root in southern France in the twelfth century, among people who thought they were good Christians and that God's true message had finally been revealed to them.  This version is often called Catharism (from catharsis, a freeing or purging of oneself from troublesome things), and the Albigensian Crusade was launched against it in 1209 (on which see more here).

We're finishing a sequel, Heretic Wind, for anyone who enjoys the first one.  Coming soon! 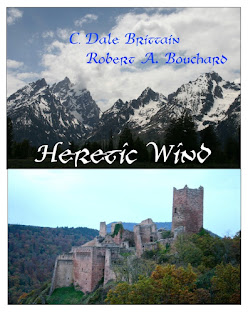 For more on real medieval heresy, see my new ebook, Positively Medieval: Life and Society in the Middle Ages.

Posted by C. Dale Brittain at 3:57 PM No comments: