I hope no one reading this blog thinks of history as "memorizing dates."  But there are still a few dates that everyone ought to know.  One of those is 1066, the date of the Norman Conquest of England.  It had major political, social, and cultural ramifications for England (and subsequently for the US.)

Between the seventh century and the eleventh, England was a Christian territory, with some scholars very well educated in Latin.  But its primary language was Anglo-Saxon, not the Old French of the territory right across the Channel.  England did not have the knights, the castles, or the fiefs that developed on the Continent in the first half of the eleventh century.

In 1066 King Edward of England died childless.  He was nicknamed "the Confessor" for his holy way of life--a confessor is a sort of second-class saint.  Several people were convinced they were Edward's rightful heir, including Harold Godwinson, an Anglo-Saxon lord, and William, duke of Normandy in France.

(Vikings had settled in Normandy--named for them--at the beginning of the tenth century and had in the subsequent generations become French, if lively French.) 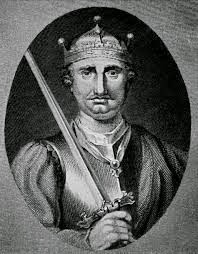 Indeed, William claimed that Harold Godwinson had promised that he would be the next English king, after William had rescued him from shipwreck.  Harold remembered the whole event quite differently.  William is nicknamed "the Conqueror," so you can tell how this is going to turn out.

When Edward died, Harold Godwinson was elected king by the witangemot, the Anglo-Saxon general assembly of nobles. But no sooner was he crowned than he heard that England was being invaded--from Scandinavia.  A third claimant from there, Harald Hardrada, had allied with Harold Godwinson's brother and decided that he was rightful king of England.

Harold Godwinson met Harald Hardrada in a great battle and won.  Unfortunately for Anglo-Saxon purists, this great battle is now nearly forgotten, for no sooner had the English won than they learned that William had sailed from Normandy.  The exhausted English army met the Normans near Hastings and held their own remarkably well, in spite of just having marched on foot all the way down from Yorkshire, and in spite of having to face mounted knights.

But Harold Godwinson was killed, and many of the English lords with him.  William then declared his own men a witangemot, they elected him (who could have predicted?), and he was crowned king.

England under the so-called Anglo-Norman kings was immediately transformed.  Knights and castles were established on Continental models.  William declared the men who had accompanied him were now dukes and counts (earls) and insisted they hold from him in fief, the first time a king had been involved in fief-holding.  As English bishops died, they were replaced with French ones.

This was the beginning of the creation of the language we now call English, which has both Germanic elements (from Anglo-Saxon) and French/Latinate ones (from Norman French).  Modern English indeed has as many words as modern German and modern French combined.  In Anglo-Norman England, there were two distinct languages, one for the conquerors and one for the conquered.  In modern English, built on both these languages, a pig running around is a swine, a Germanic word, until it reaches the table and becomes pork, a French word--an Anglo-Saxon peasant raised swine, but a Norman lord ate pork.

Even now, the Germanic/Anglo-Saxon term is the simplest and pithiest, the French the more elegant.  You can say things in English in two ways.  It is possible to express a concept in English in a dual manner.  (See what I mean?)

© C. Dale Brittain 2015
For more on medieval political and social history, see my ebook Positively Medieval, available on Amazon and other ebook platforms.

Email ThisBlogThis!Share to TwitterShare to FacebookShare to Pinterest
Labels: 1066, Norman Conquest of England, origins of English language, William the Conqueror