Europe was Christianized starting in the second century, and by the fourth century Christianity was the official religion of the Roman Empire.  So why does one often see references to the Middle Ages as semi-pagan?

Part of it of course is an unwillingness to see anything beyond one's own version of Christianity as "real" religion.  Protestants in the past were especially prone to do this, announcing that since modern Catholicism considers itself the unique heir to medieval Christianity (spoiler alert, it isn't), and since (according to these Protestants) Catholicism is Wrong (and probably superstitious to boot), then the label of Paganism can be blithely applied.  I kind of hope medievalists these days have gotten over this.

Another issue is that a lot of medieval holy sites had been holy sites long before Christian missionaries showed up.  Scholars have tended to assume that either the ignorant peasantry didn't know the difference between one version of religion and another, or else the manipulative priests tricked their new flocks by letting them carry on with their pagan practices.

But this doesn't always work.  Some springs, like the sources of the Seine, were clearly holy springs before the Romans even reached Gaul, because wooden votive offerings have been found in them, as seen below, but the springs acquired no Christian cult.  (The sources of the Seine, now owned by the city of Paris, instead now have a nineteenth-century grotto and statue.) 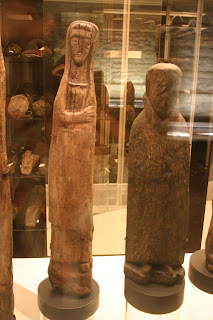 In other cases, springs or wells became holy only many centuries after paganism had died out, so it would be difficult to claim that a holy well was a pagan survival that had lurked undetected for 700 years.  For example, a monastery near Angoulême, in southwestern France, announced in the twelfth century that it had discovered the relics of Mary Magdalene in its well, and for a brief time pilgrims came to drink the well's waters.  But the well had never been holy before, and it soon stopped being so again.  (The monastery of Vézelay in Burgundy, well known for having the relics of Mary Magdalene, loftily ignored what the monks there would have considered nothing but a pathetic fraud.)

And a place can continue to be holy with changes in official religion without either ignorant peasants or manipulative priests.  The great cathedral of St. Andrew's, in Scotland, was destroyed during the Protestant Reformation, as the local populace became Presbyterian and decided they didn't want what they considered nasty Catholic magnificence.

But as seen below, they still needed a place to bury their dead, so the land next to the cathedral ruins, even inside what had once been the (now roofless) cathedral, became a cemetery, used until the early twentieth century.  Even though nobody was a closet Catholic, and even though their ministers weren't trying to trick them, an old church just had the kind of atmosphere that seemed appropriately holy. 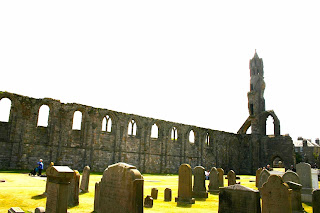 Medieval Scotland doesn't get a lot of scholarly attention, outside the universities of Edinburgh, Glasgow, and St. Andrews.  For that matter, a lot of Americans assume that Scotland is "in" England, which it certainly is not (though England, Scotland, and Wales are all located on the island of Great Britain).  Rather, England and Scotland, along with Wales and Northern Ireland, are the United Kingdom, four different kingdoms that all share one monarch (currently Queen Elizabeth II).

From the Scottish point of view, Scotland absorbed England and the rest, rather than the other way around, because James VI (son of Mary Queen of Scots) was already king of Scotland when he was asked to come be king of England as well (as James I).  The kingdoms have been united (more or less) ever since.

But this was in the seventeenth century.  Before then, Scotland was its own country.

In early days, when the Romans were in Britain, what is now Scotland was full of people the Romans called Picts ("painted" people).  They were considered scary and dangerous, which is part of the reason Hadrian's Wall, some 80 miles long, was built across Great Britain, a little south of the current English-Scottish border.  The Romans traded with the Picts and even went up there occasionally, but essentially civilization was assumed to stop at the wall.

There was a great deal of moving around once the Romans pulled out, and people from what is now Ireland, called Scots, moved into the western part of what we call Scotland.  Great battles were joined between Scots and Picts, commemorated in Pictish sculptured stones, though it's hard to say who is who in the carvings. 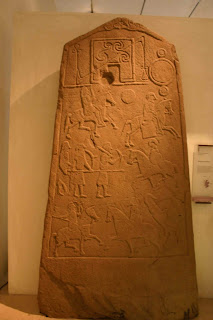 The whole area became Christianized, in many areas faster than did Anglo-Saxon England (remember, the Christian Romans pulled out of Britain and the pagan Angles and Saxons showed up at about the same time).

Eventually Picts and Scots united in one kingdom, further complicated by the advent of Vikings, who settled in the area and intermarried with the locals.  The MacDonalds, lords of the western Isles, were considered half Irish and half Viking and feared (or celebrated, depending on your point of view).

The thirteenth through fifteenth centuries were marked by repeated wars with England, which kept on trying to invade and take over, but the Scots kept winning.  Robert the Bruce and William Wallace are still celebrated as great heroes in these struggles for independence.  (See more here on Scottish castles.)

By the eighteenth century, when England and Scotland had long stopped fighting each other (okay, there were still Jacobites, descendants of James I/VI who thought they should be king after England had gone in a different direction, but let's stay away from that for now), the Scots were considered sort of dirty and crude.

But hah!  They were able to reinvent themselves in the nineteenth century as full of wholesome natural country virtue, when more industrialized areas were starting to think that sophisticated cities and pollution weren't as good they had been supposed to be.  (The Swiss did the same thing at the same time.)

This "invention of tradition" as it is called created a semi-legendary past for Scotland, including the idea that every clan had (and had always had!) its own distinctive tartan and that bagpipes and kilts were uniquely Scottish.  Everybody needs symbols of national unity. 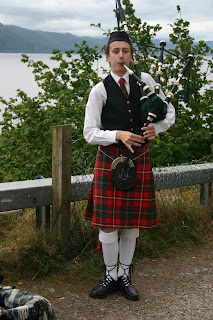