Meat in the Middle Ages

Modern people in the West have an uneasy relationship with meat.  On the one hand, we love it.  The smell of hamburgers on the grill or turkey roasting gets everyone's attention.  It's obvious from our teeth and from archaeology that our Stone Age ancestors ate meat (normally cooked) as part of their diet.  Meat has more calories per volume than vegetables (generally), so if one is hunting and gathering it makes sense to hunt for meat.  Humans can eat pretty much every kind of animal, whereas an awful lot of plants are indigestible or just don't produce nutrients for us (grass won't work for humans). 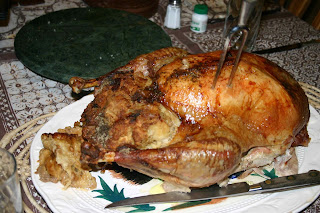 On the other hand, there are a lot of things we think "bad" about meat.  Every recipe for a "healthy diet" starts by talking about cutting back on red meat with its saturated fat.  Many vegetarians and vegans believe it is not right to raise sentient creatures just to kill and eat them.  (I once saw a sign in range-country Wyoming, fighting back:  "Did you know that every day thousands of innocent plants are killed by vegetarians?  Eat more beef!")  This is further complicated by the popularity of things like gluten-free diets, the so-called "Paleo" diet (not clear where Paleolithic woman would have gotten the olive oil), and low-carb diets, where one tucks happily into meat.

As I discussed in an earlier post on the medieval diet, medieval people had a lot fewer foods to choose from than we do, because they didn't have New World foods like corn and chocolate (much less processed foods or fruits and vegetables out of season).  For them, the majority of their daily calories came from bread.  "Give us this day our daily bread" was not spoken metaphorically.  However, they loved meat and ate it when they could.  They couldn't have cared less about saturated fat.

Meat was expensive, rare, and hard to keep fresh centuries before refrigeration.  For most medieval people, pork was the most common meat, but it was only eaten fresh in the fall, at the time of the big pig roundup and slaughter.  Everyone at their fill, then the rest was smoked and salted to last the winter as an occasional treat.

The aristocracy hunted for deer and went hawking for birds, but over-hunting then, as now, can drastically reduce the population of hunted creatures, so the powerful tried (without overwhelming success) to restrict the right to hunt to themselves.

For most people, beef was eaten only when the old dairy cow was no longer producing, and chicken when the hen stopped laying, though young bulls and cockerels might be harvested out of the flock.  Songbirds and rabbits provided additional sources of meat.

Red meat was considered to make one lively and lusty.  Monks considered this bad, so they normally ate no red meat at all.  (It all made sense in terms of Humors.)  To lead a pure and simple life, breaking away from material things, they had to give up meat.  Meat broth might be allowed, however, if a monk were ill, and there were always stories (about other monasteries, of course) about monks who feigned almost constant illness so they could live in the infirmary and have meat.

For a special guest (like a bishop or a great lord), the abbot would be expected to serve something better than the bread and vegetables on which the monks normally lived (with maybe some eggs).  So they would serve fish or maybe cheese (but preferably fish), not red meat but a little classier than regular monastic fare.

This idea that fish was a semi-penitential food, halfway to being a vegetable and certainly not to be considered red meat, gave rise to the assumption that Catholics should eat fish rather than meat on Fridays during Lent.  (It used to be every Friday, but it's just been Fridays-in-Lent since the 1960s.)  These days, however, eating fish (generally more expensive than hamburger) has lost a lot of its penitential aspect and seems more a ritual act.

Our grocery was advertising "crab legs for Lent."  Let's not go into detail on that one.

Posted by C. Dale Brittain at 6:28 PM No comments:

The stereotype of an artist today is someone starving in a garrett, probably wearing a beret, maybe smoking a cigarette and drinking absinthe.  This stereotype probably derives ultimately from the opera La Bohème (a great opera, but not a particularly informative work of social history).  Were medieval artists like this?

Medieval artists were not free-spirited individuals creating art in solitude and following their own muse (and starving), but rather professional artisans, employed (and paid) to produce art.  The distinction between art and architecture which we make really didn't make sense.  The majority of medieval art was religious, and a lot of it was produced for churches.

The people who employed artists were often religious leaders (bishops, abbots) but might be wealthy lay people, especially in the late Middle Ages.  Art included illustrations in Bibles and religious books (called illuminations), statues big and small, crucifixes and other liturgical objects, carvings on the fronts of churches or on the capitals at the top of pillars, and wall paintings. 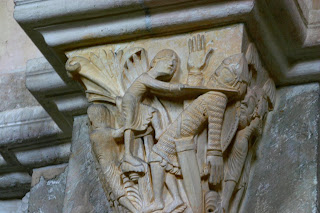 The above image is a capital at the top of a pillar, showing the story of David and Goliath.

There were standard ways of depicting certain people and events; Saint Peter, for example, was always shown with enormous keys.  But the artists had a great deal of latitude in how they worked with the standard expectations.  Artists were given a lot of room for creativity, so that even though a particular image might look at first glance a lot like others, the individual artist would make it his (or hers).

It used to be believed that medieval artists worked anonymously, but in fact the best ones had excellent reputations, and artists often signed their works.  A lot of these signatures have been worn off over the centuries, but if you look carefully at the tympanum over the front door of Autun cathedral, you will see the words "Gislebertus hoc fecit" right under Christ's feet, meaning, "I Giselbert made this."  Giselbert was rightly proud of his work. 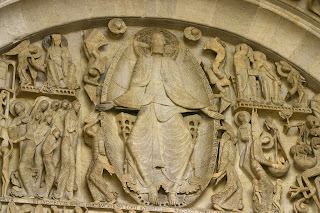 (The above image may be too small for you to see the words, but they're there.  See detail.)

Art was valued both for its beauty and for the value of the materials as well as the quality of craftsmanship.  Illuminations in Bibles, for example, often included gold leaf.

During the Renaissance (which is really another term for the late Middle Ages in Italy, as I have discussed elsewhere), artists started to produce portraits of lay people, which had not really been found earlier, other than a few kings.  Again, the artists were commissioned (and paid).  They often worked  in ateliers, with masters and apprentices.  The great majority of Renaissance art, however, was religious.