Black and white in the Middle Ages

Medieval people would most certainly not be considered inclusive and welcoming of diversity by today's standards.  Anyone who wasn't an orthodox Christian (i.e. not a heretic), or who didn't know how to speak the local language, was treated at best with suspicion.  But skin color was not nearly as big a factor as it is in the modern US.

In part this was because western Europe had a great range of skin and hair colors anyway, with more light-skinned blonds in Scandinavia and Celtic areas like Ireland, and more swarthy skin and black hair along the Mediterranean.  The Mediterranean had been a melting pot since at least the early days of the Roman Empire, with African, Middle Eastern, and European ethnic groups all intermixing.  In the late Empire, a freed slave became a citizen, and his children might marry the descendants of people who had never been slaves.  Frescos from ancient Rome show a progressive darkening of Romans' skin over the generations, as more African genes mixed with the original Roman Celtic genes.

Spain and Italy especially had populations that mingled genes from all over the Mediterranean and sub-Saharan Africa, as well as from northern Europe.  Think about "Spanish eyes," dark and flashing.  They didn't get them from the Visigoths.

So medieval Europeans were happy to deal with people with a great range of skin tones without trying to identify them by "race."  Blond and blue-eyed, however, remained the default definition of beauty, as indeed it still is the US—notice how actresses and even TV personalities are far more likely to be blond than the frequency of light hair in the general population would warrant.

Light skin was not just a marker of beauty but a marker of wealth and status.  These days, when most people have indoor jobs, getting a tan makes a Caucasian stand out among the pale-skinned.  In the Middle Ages, when most of the population was involved in farming and thus were outdoors a lot, having pale skin was good, because it meant you weren't a peasant.

It was very rare that a European saw a sub-Saharan African, someone with very dark, essentially black skin.  They knew however that such people existed.  The Romans had mentioned them, and the Queen of Sheba in the Bible was described as "dusky."  (It seems most likely that she was from what is now Ethiopia.)

In the medieval story of "Parzival," Parzival father had lived in the Middle East for years with a woman as dark as the Queen of Sheba.  He never married her, however, according to the story, not because of her skin color but because she was not a Christian.  They had a son who eventually came to Europe and met Parzival, his half-brother.  This mixed-race son was described as spotted, black and white.

Medieval people didn't think through where the range of European skin tones had come from.  But they knew that if you bred a black and a white cow, or a black and a white horse, you'd get offspring with black and white spots.  Humans must be the same.  It all made sense.

Why do bad things happen?

Why do bad things happen to good people?  This is a vexing theological question if one assumes a loving God.  It has come up again in the aftermath of a devastating hurricane season, Harvey and Irma and Maria and Nate, which did serious damage to the US and the Caribbean.  Most of the victims were doubtless good people.

In some ways this is what they call a "First World Problem."  People in much of the world even today, and people in most of the pre-modern world, wouldn't have had philosophical discussions about why bad things happen.  Bad things happen, they would say, because bad things always happen:  fire, flood, disease, accident, war, betrayal, hunger, quarrels, loss …  The list goes on for quite a while.

Even in the modern US, where most of us (when we are not evacuating from hurricanes) can imagine we're fairly good people leading fairly good lives, bad things happen to everybody.  One interviewer I heard said she can always get a perhaps reluctant person to talk by saying, "Tell me about a time you were treated unfairly."  Then she couldn't get them to shut up!

I guess if someone were born into privilege and had every want catered to, and died unexpectedly and painlessly before anyone they loved died, then maybe nothing bad happened to them during their life (until they died of course). 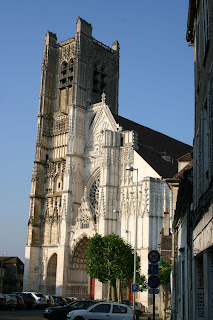 The most obvious answer was one derived from the Old Testament, that everyone was to be punished for the sins of the few.  Thus one reads in the Bible about "the sins of the father" being punished in all his descendants.  God destroying the earth with floods because of some bad actors, or wiping out Sodom and Gomorrah because some people there threatened His angels, certainly suggest that one can suffer for someone else's fault.  Even today, there is talk in some circles of God bringing about hurricanes because the US is not strict enough against sexual sinning.

Medieval thinkers, however, would not have agreed.  For the most part, they rejected the idea of the many suffering for the few.  Medieval Christianity put the New Testament ahead of the Old, with its emphasis on individual rather than collective responsibility.

So why did good people experience pain and sorrow?  The answer was easy to medieval theologians.  There were no good people!  Everybody was stained with original sin and deserved suffering in this life and damnation in the next.  Only because of God's completely undeserved mercy did anyone make it to Heaven at all.

(Medieval Christianity was not "comforting."  See more on this here.)

The only really good people were the saints, and they suffered the most of all.  All the early martyr-saints had had horrible things done to them for their faith, like being slowly cooked on a griddle (Saint Lawrence).  This suffering, for medieval theologians, burned away the sin in them, strengthening them and making it possible for them to become saints.  People who wanted to emulate the saints deliberately sought out extremely unpleasant experiences, if not actual martyrdom.

Posted by C. Dale Brittain at 6:53 PM No comments:

People on diets these days (i.e. almost everyone, at least at some point) try to "cut back" their fat. Modern nutrition guidelines specify that only a certain percentage of one's calories should be from fat.  But in all premodern societies, including the Middle Ages, it was hard to get enough fat, which one actually needs (at least in moderation).  One also needs it for cooking, especially in a pre-Teflon era.

The main medieval choices were olive oil and butter.  There was no soybean oil, canola oil, or margarine.  Lard was the third way (and some cooks still insist lard is best for pie crusts--I wouldn't know.)

Olive oil had been the Roman choice, as it had been for the Greeks.  The "anointing with oil" events in the Bible were all examples of olive oil.  It could also be used to burn for light.  And athletes in antiquity, without today's "refreshing shower gel," got rid of the sweat by smearing themselves with olive oil, sprinkling on sand, and scraping it all off.

Olive trees grow well around the Mediterranean, providing both their fruit and oil.  Southern Europe continued throughout the Middle Ages to rely on olive oil as the major source of fat. 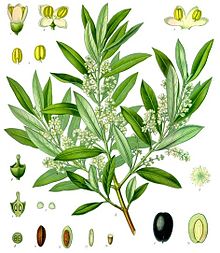 Olive trees, however, do not grow well further north, although the oil certainly traveled on the trade routes.  For northern Europe, butter (made from churning cream) was the chief source of fat in the Middle Ages.  If salted and kept cool, butter will keep quite a while.  In Scandinavia, butter might be stored for over a year.

When the Germanic people first came wandering into the Roman Empire, bringing their cows with them, the Romans reacted with disgust to this source of fat.  But then the Germans weren't totally impressed with olive oil. 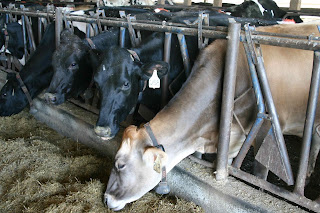 Butter works well for greasing the pan, mixing with flour for baking, and making dry food more palatable.  But it doesn't work nearly as well for lamps, anointing, or scraping off the sweat.