There's being poor, and then there are attitudes about the poor.  Modern society hasn't exactly figured out the appropriate attitude, and neither did medieval society.  By modern standards, all medieval people were poor, lacking the material goods we take for granted, but people then didn't think so.  This meant those who considered themselves wealthy or at least well off had to decide what to think about poor people.

For starters, medieval people couldn't decide whether poverty was a sign of holiness or the result of sin.  As I discussed earlier, voluntary poverty was considered very holy in the late Roman Empire and in the High Middle Ages, times of (relative) economic prosperity and wealth, when renouncing wealth was a sign of devotion to God.  After all, the New Testament depicts Jesus as without possessions or even a house.  Many twelfth-century churches deliberately sought to be simple and undecorated--but not all, showing the basic division of opinion.  Saint Francis in the thirteenth century said he was wed to Lady Poverty.

But even at other times (the early and late Middle Ages), when life was a lot tougher for a lot more people and holiness became equated with wealth, poor people were not automatically spurned.  Although theologically it made sense that poverty was a product of sin, this did not mean then that poor people were specifically sinful.  Rather, Original Sin, everybody's sinful nature, meant that there was poverty in the world.  (Original Sin is a great explanation for all sorts of things.)  "The poor we have always with us," says the Bible.  This meant the wealthy were always responsible for trying to help them.

Giving alms, helping the poor, was considered a religious duty.  Both laypeople and churches sought to help poor people.  The wealthy in lay society and those monasteries that did not go in for extreme simplicity themselves would distribute leftover food at the back door after every meal.  The poor did especially well if there was a feast.

Some monasteries had what were essentially official poor people, those who were fed daily, got new clothes once or twice a year, and had their feet washed on Maundy Thursday.  In all of this, the emphasis was not on the poor people themselves.  The emphasis was on the wealthy or comfortable.  It was their Christian responsibility to help poor people, which meant they would establish official poor folks living nearby if they had to, so that they could help them.

There was still ambiguity about poor people.  Sure, you were supposed to help them, but suppose they were scary and dangerous?  Dirty, unkempt people are always scary, and it's easy to be dirty and unkempt if you have nowhere decent to sleep, no good clothes, and no way to bathe.  And yet the scariest people were not the poor but the powerful.  A knight might be clean and well-dressed, but he also had a sword and a short temper.  Overall, the poor were those to be pitied and helped.

Things changed in the fourteenth century, when over-population and a string of bad harvests (always a bad combination) led to famine.  Now there were a lot of poor people, most of whom were poor not for religious reasons but because they had lost their livelihood.  Their numbers overwhelmed the charities that had supported the poor for the last few centuries--after all, they too now had less food to distribute.

Really for the first time the well to do started making distinctions between the "deserving" and "undeserving" poor, those who deserved to be helped and those who didn't.  Thieves and bandits could be easily classified as undeserving, even if they'd stolen only to keep from starving.  Children with big eyes got to be deserving.

The twenty-first century has the fourteenth century's distinction between deserving and undeserving poor.  But we draw the line somewhat differently.  The fourteenth century wanted to know if the poor people being helped were moral people.  Today the concern is that they not be goof-offs.  There is a very strong assumption that many poor people choose poverty so that they can avoid work and get freebies, which is why they have to be very carefully vetted before receiving benefits, and food stamps can't be spent on certain foods that they "don't deserve."  Many would change their attitude if they suddenly had nothing.

Today an eclipse was seen throughout much of the US, reaching totality in a coast-to-coast strip (we were in the 80% range).  So it seems like a good time to blog about eclipses.

These days astronomers can predict eclipses by calculating the paths of earth and moon.  (Eclipses of the sun are caused by the moon passing between us and the sun, eclipses of the moon by the earth passing between sun and moon.  But you knew that.)  There was no way for medieval people to make such calculations.  (The US is going to have another total eclipse of the sun in 7 years.  Plan ahead.)

Medieval people were therefore always surprised when an eclipse showed up.  Although there are plenty of modern notions that medieval people thought they were caused by demons, or thought a dragon was eating the sun (or moon), this is not true.  Medieval people knew perfectly well what an eclipse was, even if they couldn't predict it.  After all, even if you don't know that the earth goes around the sun, rather than vice versa, you could certainly understand how the moon could block the light of the sun or the earth the sun's light reflected from the moon. 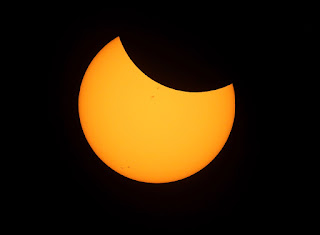 Remember, medieval people assumed the earth was a globe, just like the moon.  The "earth was thought to be flat" fable was invented in the nineteenth century.

Some eclipses may well have passed unnoticed.  If it's a cloudy day, even an 80% eclipse of the sun won't look like much of anything.  And a cloudy night would mean you'd totally miss a lunar eclipse.  But medieval people saw and reacted to eclipses.

The usual explanation was that God had sent the eclipse to mark some major upcoming event.  After all, the normal understanding was that God was actively involved in His creation, even though they couldn't always figure out the hints He tried to give them.  If anyone important died shortly after an eclipse, then it was understood that the eclipse had been sent to warn about this event.  After the death of Henry I of England, many recalled a recent solar eclipse.

It is possible to calculate eclipses after the fact as well as ahead of time.  Astronomers have noted an eclipse that took place in the spring of the year we call 29 AD, which some have identified with the "darkness at noon" that the Bible says accompanied the Crucifixion.

For more on medieval life, see my new ebook, Positively Medieval: Life and Society in the Middle Ages.

Posted by C. Dale Brittain at 2:36 PM No comments:

Email ThisBlogThis!Share to TwitterShare to FacebookShare to Pinterest
Labels: eclipses in the Middle Ages, medieval eclipses

Medieval peasants. it is often now assumed, had little opportunity to express their own ideas or to choose for themselves what to do.  This is actually not true.  Although some peasants were legally restricted by having servile status, being "serfs" (not the same as slaves), all of them had opportunities for independent action or "agency," as the social scientists call it.

The term peasant means a country person (paysan in French, from pays, countryside), whose days are spent in farming, often paying rents and dues to a landowner who was supported and fed by the peasant's labor.  A peasant would live in a small village, not a town.  As much as we would all like to imagine we are descended from lords and ladies of the Middle Ages, most medieval people were peasants, and hence so were most of our ancestors.

These people, mostly being illiterate, did not produce written records, appearing instead either in the records of more powerful laymen or in records of the church.  Scholars thus long assumed they were marginal or even silent, at any rate not worth trying to study.  Interestingly, the same assumptions were once made about medieval women.  Once scholars stopped assuming "We'll find no information on women in the records" and thus didn't bother to look, and instead started looking, they found a lot.  The same is true of peasants.

Where peasants are seen most frequently is in legal disputes or in negotiations with their landlords.  Landlords were not in a position simply to impose whatever they wanted on their peasants.  Everyone believed in the value of tradition, meaning that sudden changes did not seem right, and even more importantly, peasants had a lot of leverage.  If a landlord gave them too hard a time, they could just leave.  No aristocrat wanted to end up walking behind his own plow or harvesting his own grain.

Peasants could also play different aristocrats off against each other.  Nobles wanted to be considered "defenders of the poor," and peasants knew that and could exploit it.  Where a serf had both a lord of the body and a landlord (different persons), he (or she) could appeal to one against the other.  Peasants could also appeal to the big regional courts.

In one well-known case, peasants appeared before the court complaining about a local noble, saying they were helpless, saying all they had was their "tormented voices."  They understood very well what all medieval people knew (though many moderns have forgotten), that professed weakness can be a real source of strength.  The court had little choice but to rule in favor of these "tormented" peasants.

It was through negotiation that twelfth-century peasants managed to get out of some of their more burdensome obligations.  For example, one of the markers of servitude was having to pay an annual head-tax, usually a penny a head.  Peasants who had been selling their produce to the growing towns and had saved up could and did offer their lords of the body a fairly large one-time payment in return for not having to pay the head-tax.  The lords of course accepted, but this meant that there was no longer an annual ceremony indicating that these particular peasants were serfs.  In a generation, they would have "forgotten" that they and their ancestors had ever been other than free peasants.

As landlords opened up previously-uncultivated land for farming during this period, they needed to attract peasants, and thus offered them low rents and the opportunity to regulate themselves in what was known as a commune.  In some cases the peasants insisted on having this in writing; the local priest could read it for them.

Certainly being a medieval peasant would not have been an easy life. By our standards even the most well-to-do were desperately poor, with none of the material goods we take for granted, living in a rough house with a dirt floor, snuggled up to the cowshed.  There was always the worrisome question whether the harvest would come in this year (no peasant ever decided he needed to go on a diet), and the back-breaking work would have worn them out by the time they were in their fifties.  But they were smart, and resourceful, and entirely capable of outwitting those who considered themselves their betters.

For more on medieval peasants, see my ebook, Positively Medieval:  Life and Society in the Middle Ages.