Back when iron started becoming widely used in Europe, say roughly 500 or 1000 BC give or take a few centuries, people started building hill forts.  Because they didn't write down what they were doing, clearly having no consideration for their descendants a few millennia later, we aren't quite sure if these were places from which lords looked down in fierce disdain at other people, or if they were villages that felt they needed some sort of protection against wild animals or people from the next village, or if perhaps they were sacred sites where people would assemble for rituals at certain times of the year.  They were at any rate big, with at least a few acres inside their outer walls.

They did in any event take an awful lot of work to construct, which might go on for generations.  Some had earthen walls, with a few openings.  The Mound Builders in what is now the US built similar structures for equally obscure purposes.  (The ancestors of the American Indians did not have iron, however.)  Or an iron-age hill fort might have stone walls. 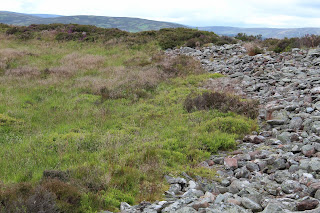 The image above is a hill fort in Scotland.  It was built with stone walls that are still there, even though they are now stone humps rather than walls.  There are millions of stones up on top of this hill, every one of which had to be carried up there.  Interestingly, there are no loose stones evident anywhere on the hill's lower slopes.  The following image will give you an idea of how high up this spot is. 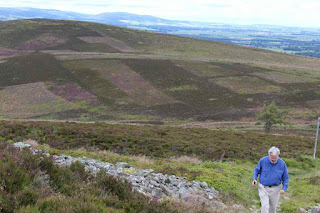 Under the Roman Empire hill forts were found all over Europe (though now used for different purposes), and a lot of them had castles built on top of them in the Middle Ages.  Castles went up a whole lot faster than cathedrals, and my guess is that there's a simple reason:  if there was a good hilltop spot with a lot of stones already collected, that would strike everyone involved as a perfect place for a castle.  Why spend a lot of effort collecting stones when they were already there?

For more on medieval castles, see my ebook, Positively Medieval:  Life and Society in the Middle Ages.

Posted by C. Dale Brittain at 3:24 PM No comments:

I recently realized that historical fiction set in the medieval period shows ordinary life as functional, not blessed with the comforts and facilities of modern (western) civilization, but workable, the way that one can function and enjoy oneself while back packing or the like.

In contrast, historical fiction set in the early modern period (roughly 1500-1800) shows ordinary life as brutal and nasty.  People are ill, victims of violence, hungry, smelly, and surrounded by death.  So of course I started to wonder, why is this?

In part of course it's due to the Enlightenment.  This philosophical movement of the eighteenth century, which saw education and culture as the answer to humanity's problems (to a large extent I agree with them), looked at their past as full of darkness, ignorance, superstition, and misery (here they and I part company).  They saw a possible future with much better lives if only everyone could be educated, exposed to finer things, learn scientific approaches, and have at least a little tiny movement toward democratic institutions.  The Enlightenment inspired both the American Constitution and the French Revolution.

Thus we shouldn't be surprised that the French Revolution was ready to get rid of anything "old fashioned," which included what they called feudalism (see more here about why medievalists don't buy their definition), religion, and the kings and queens carved on Notre Dame, whose heads they knocked off.  (One head recently found is shown below, now in the Cluny museum in Paris.) 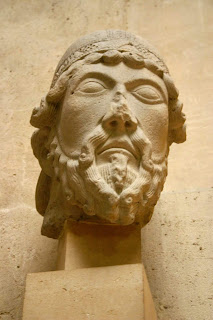 But then, early in the nineteenth century, indeed during the Napoleonic era, Sir Walter Scott started writing books set in a romanticized Middle Ages (Ivanhoe has a lot to answer for).  As industrialization ('good' according to the Enlightenment, full of science and machines) separated the workers from their products and filled streams with pollution, people yearned for an earlier, better era and decided it was the Middle Ages.  This golden glow never fell on the early modern period.  The historical novelists followed right along. 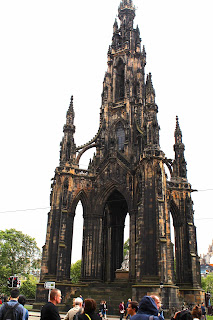 That's the Sir Walter Scott memorial in Edinburgh, above.

So people were inspired to see the Middle Ages as better than the early modern period.  But there's more to it.  If you compare the twelfth century with the seventeenth, the twelfth has to win.  The Protestant Reformation had given Christians a reason to kill each other, far outshadowing things like the Albigensian Crusade.  In the early modern period you had frequent outbreaks of the Black Death, which had been unknown in the twelfth century (it broke out in the sixth century but then not again until the fourteenth).  Its outbreak in London in 1666 was stopped only by the great fire that destroyed most of London.  (But hey! it worked!  It wasn't actually deliberate.)

This was also the time of the Thirty Years' War (1618-1648), which European historians characterize as Europe's worst war ever, even worse than the World Wars for destruction of property and civilian deaths.  Cannons had become very effective at killing people.  There was a great deal of urban crowding and slums, which hadn't shown up yet in the small-but-growing cities of the twelfth century.  Slavery had been revived to cultivate the land in the New World, with an accompanying disdain for non-elite people.  The New World had given Europe syphilis, unknown in the Middle Ages (though Europe got their own back, decimating the indigenous population of the Americas with smallpox and measles).  Kings were proclaiming themselves kings by divine right, which had not been possible in the Middle Ages.  There was a great deal of famine and general misery.

For more on medieval history, see my ebook, Positively Medieval:  Life and Society in the Middle Ages.

Posted by C. Dale Brittain at 4:06 PM No comments:

Alsace is part of France, the area right up against Germany.  But it has been under German control at least as much as French over the centuries, and although everyone speaks French there, and the schools are run in French (and the hotels give you croissants in the morning), the locals speak a dialect of German at home.

So how did Alsace end up in the middle, so that in much of the nineteenth and twentieth centuries it was handed back and forth multiple times between the two countries?  Since this is my Life in the Middle Ages blog, you won't be surprised to learn that a big reason is medieval political history.

Let's go back to that magical year of 843 and the Treaty of Verdun.  Although Charlemagne, Roman emperor, and king of what is now France, Germany, the Benelux countries, and northern Italy, only had one surviving son when he died in 814, he had three grandsons who all wanted to kill each other.  They decided instead to divide Europe between them (hence the treaty).  Charles "the Bald" got France, Louis "the German" got Germany (you probably already guessed that), and Lothar, the oldest, got Lotharingia, the strip between France and Germany and extending down into Italy.  He also got to be crowned Roman emperor. 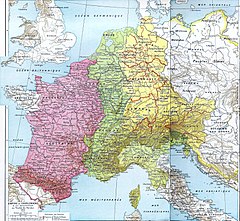 In the map above, the pink area was under the French king, the yellow area under the German king, and the green area is Lotharingia.

Alsace was already a perfectly good duchy, and it was included in Lotharingia (so was Lorraine, whose name is a corruption of Lotharingia).  As you can imagine, both the French and German kings decided Lotharingia was rightfully theirs.  For most of the Middle Ages, the German kings (who elbowed their way into being Roman emperors too) held Alsace (though Lorraine was French, it's where Joan of Arc came from). 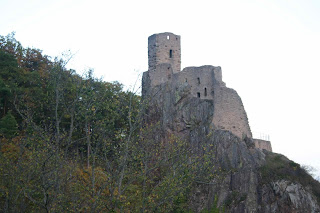 Because it was always a border area, Alsace is still thick with castles.  It also has extremely cute half-timbered villages, the way one imagines places like Bavaria might look like.  Because Alsace was taken very quickly during World War II, it was devastated much less than most of Germany.  Visit cute Germany while still getting croissants for breakfast! 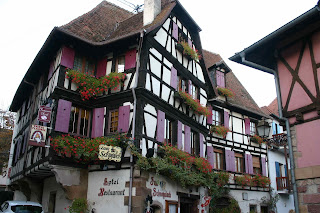 © C. Dale Brittain 2019
For more on medieval kings, see my new ebook, Positively Medieval: Life and Society in the Middle Ages.  The cover image is a staircase cut into the bedrock in an Alsatian castle, Fleckenstein.

Posted by C. Dale Brittain at 2:52 PM No comments: