The Middle Ages is often characterized as an Age of Faith.  It's not entirely clear what this term is supposed to mean, but the assumption appears to be that everyone in the Middle Ages was a devout Christian, living in some odd combination of the stereotypical view of modern evangelical Christians and the Monty Python version of the Spanish Inquisition.

But this vision is false.  By far the majority of the medieval population was at least nominally Christian, as is also the case today in the US and the UK, but this did not mean that their Christianity was anything simple, or that its church enforced certain beliefs on everyone.

To begin, for most of the Middle Ages no one really knew or cared what most of the population believed.  There were no parish churches in rural villages before the twelfth century, so although it was expected that people would come into town to have new babies baptized, church attendance was by no means universal.  Many chronicles took it for granted that the ordinary townspeople and the peasantry would mock the Church and the saints.

One twelfth-century chronicle describes a relic-tour:  the monks needed to rebuild their church and took the relics of their saint on tour, asking for donations wherever they stopped and displayed the relics.  In one town, an ugly crowd approached them, saying, "Ha, if your saint is so powerful, let's see a miracle!"  Then they all laughed.  The monks, terrified, prayed desperately, and to their own shock, as well as that of the crowd, a miracle actually happened (a person healed).

The author of this chronicle was of course trying to demonstrate the power of the saint, but he also assumed that his audience would recognize skeptical townspeople as normal. 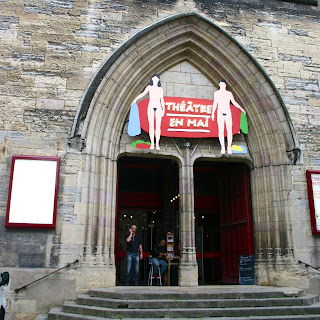 There are still plenty of medieval churches scattered across modern Europe, far more than are required for the religious needs of a population now much bigger than the medieval population.  (This is why a number are now ruined or serving other functions, like the theater pictured above.)  But a whole lot of these churches were not set up for the ordinary population, but rather were churches where monks or canons prayed, withdrawn from the world.

If there is one aspect of the "age of faith" vision which is true, it is that far more medieval people entered the church than is the case today.  There are extremely few monasteries in the US or Europe now, but medieval Europe was full of them--and, from the twelfth century on, nunneries for women multiplied as well.  Although these churches did not serve as parish churches, pilgrims and tourists would frequently visit.  It is estimated that perhaps 10% of the male aristocratic population entered the church, even though, of course, there was no "rule," about doing so, and some families sent no sons to the church at all, while others might have everyone convert to the religious life.

The aristocrats and well-to-do merchant families who sent sons to the church produced highly-educated men (and some women) who sought to apply the logic of the ancient Greeks to their own religion.  No one at the time thought the Bible should just be read literally.  It was of course to them the word of God, and therefore it deserved special attention,  but this attention meant having to deal with the contradictions within it (especially between the Old Testament and the New) and the fact that medieval people who considered themselves good Christians were not following Jesus's explicit command to come join him preaching and wandering barefoot around the Sea of Galilee.

So the Bible could certainly be read literally in part (the Old Testament Fathers were real, Jesus's birth and miracles and resurrection were real, and so on), but other parts were to be read morally (urging good behavior), allegorically (so the love poems of the Song of Solomon became a metaphor of Christ's love for His church), or anagogically (so that events of the Old Testament that seemed to make little sense, like Abraham being told to sacrifice his son, were read as prefiguring Christian events, here God sacrificing His Son).

Thus in the supposed Age of Faith, no one worried too much about the majority of the population's rather superficial religion, and the educated leaders of the church devoted themselves to critical analysis of what they sought to believe.

Note:  The Spanish Inquisition began after the Middle Ages were over.  The only time peasant beliefs were a cause for real concern was in southern France in the aftermath of the Albigensian Crusade of the thirteenth century, when an Inquisition (not Spanish though) was begun to try to root out the heresy that had been the excuse for the Crusade.

For more on medieval religion, see my ebook, Positively Medieval:  Life and Society in the Middle Ages.

The Lost Girls and the Kobold

I've got a new audio book! 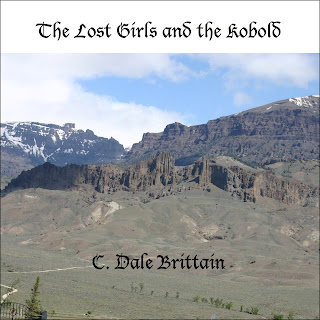 It's the audio version of the first of the Yurt novellas and is entitled "The Lost Girls and the Kobold."  It is about, big surprise, missing girls and a kobold.  Daimbert, the wizard hero, has to find the girls, figure out why and how they disappeared, and deal with the magical forces of the kobold, before rather than after generations-old legends come to horrifying life.  The narrator of the audio book is the same terrific guy who has narrated all the Yurt books so far, Eric Vincent.

It's available from Amazon, Audible, and iTunes, and if you sign up for a new Audible membership, you can get it free.  (You can also just buy it.)  Here the link on Amazon.

In my own head, of course, Daimbert, the first-person narrator, sounds like me, but Eric does a far better job of professionally narrating an audio book than I ever could.  He's now at work on "Is This Apocalypse Necessary?" the sixth and last of the main Yurt series of novels, though there are still two more Yurt novellas I'm hoping to get him to do.

The book mostly takes place in steep, rocky mountains, which is why I have mountains on the cover.  (The picture is of the real Rocky Mountains in Wyoming.  Shhh, don't tell anyone.)

Audio books are becoming more popular, something people can "read" while commuting, jogging, sweeping the floor, sitting in the same room as someone who wants to watch a football game in which you're not interested....  You can even listen for a while and read the ebook for a while, then switch back and forth.

Here's the opening, to give you a taste.

“She put on her best dress, walked out the door and up into the mountains without a word to anyone, and has not been seen since.”
“So how long ago was this?” I asked cautiously.  The woman in front of me had the worn, rangy look of someone who had worked too hard for too much of her life, but her eyes were large, dark, and compelling.  She pushed back a strand of graying hair with a hand red and rough and held my gaze with hers.
My first mistake had been agreeing to talk to her.  My second would be trying to dismiss her.
“Two days.”  She put her hands on her hips.  “A girl can go off with her young man for one day, but not for two.”
“And you expect me to find her?”  A few men with dogs, I thought, could find the girl far faster than I could.  But somehow, with her looking at me intently, I couldn’t manage to say it out loud.
“You’re a wizard, aren’t you?  What else is a Royal Wizard for?”
I could have made several answers.  A Royal Wizard is responsible for protecting his kingdom from dragons and demons.  A Royal Wizard keeps overly energetic knights from killing each other.  A Royal Wizard provides illusions to entertain the court over dinner.
And is bound by great oaths sworn on magic itself to use his powers to help others.  Some within organized wizardry might have made dismissive comments about the extent of my own powers, but I was the only Royal Wizard the kingdom of Yurt had.
“I’ll come right away, of course,” I said, doing my best not to sound resigned.  “You’ll have to show me where she disappeared.”