It's easy to think of the Middle Ages as building in stone.  After all, almost all medieval buildings that survive are the stone ones.  The cathedrals, the parish churches, the castles, are stone structures.

But in fact the majority of buildings in the Middle Ages were not stone.  As I have discussed previously, most town and village houses were "wattle and daub," wood and plaster, what would be called half-timber now.  All-wood structures were found in some places like Scandinavia, but in France and England the good big timbers were gone by the twelfth century, so people used the smaller pieces of wood for wattle and daub, though perhaps with a stone first floor if one were very wealthy. 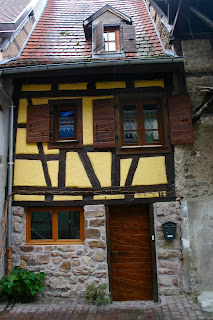 The reason stone wasn't used more is because it was too expensive and too hard to work.  We think of the Middle Ages as built in stone because the structures that survive from them are, to a large degree, the stone ones.  Even when they are not maintained, stone buildings survive as solid ruins. 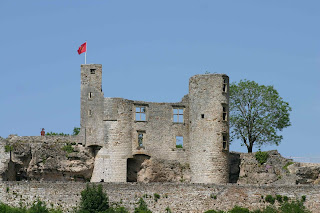 In the early Middle Ages, castles and churches were built of field stone, stones picked up from the ground and carefully set together.  In the example below, from an eleventh-century castle in Burgundy, the stone mason seems to have become creative. 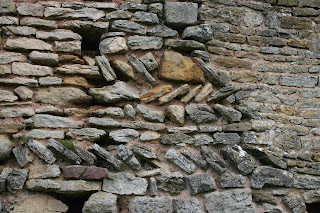 In the twelfth century, castles and churches began to be build almost exclusively from quarried stone, nice rectangular blocks.  Both the inside and outside of the wall would be smooth stone, but the center was usually filled with rubble, field stone, gravel, bits of pottery, whatever was lying around.

When the Spaniards first reached the New World and saw the impressive stone buildings that the indigenous peoples of Latin America had built, they promptly decided to use some of them as foundations for their own buildings.  They appreciated good stonework when they saw it.  The church of Santo Domingo in Cusco (Peru) was build on top of the Inca temple to the sun.

In subsequent centuries there were periodic claims that Europeans had crossed the Atlantic and gotten across the Amazon basin to the Andes to teach the Incas how to build in stone.  This is wildly improbable, based on the assumption that only Europeans can figure out how to do stonework, but at least I guess is beats the aliens-from-space hypothesis.

Inca stonework, for their finest buildings, was quarried, but they did not try to make everything rectangular.  Rather they just tried to make sure all the stones fit together very tightly.  This is especially impressive since they had no iron and had to shape their stones with chisels and polishing sand.  It is especially noteworthy that the Incas were using granite (extremely hard), not the limestone (not as hard) that medieval Europe used for its churches.  The wall pictured below is outside Cusco and is about 20 feet high (and 700 years old). 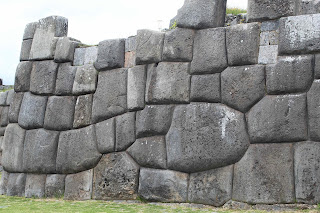 For more on medieval castle building, see my new ebook, Positively Medieval: Life and Society in the Middle Ages.

Posted by C. Dale Brittain at 6:01 PM No comments:

End of the World

Every time there's a great disaster, like a hurricane or a massive drought or the current COVID-19 pandemic, many people interpret it as a sign of the coming end of the world.  Since the early days of Christianity, people have been looking for signs of the end.  When John of Patmos wrote the book we now know as Revelations (maybe around the year 100), it provided a partial list of signs to look for.

(John was responding to a persistent issue in the first couple generations of Christianity:  why, when Jesus had said He was coming back, hadn't He done so yet? Wasn't the sacking of Jerusalem by the Romans in the year 70, accompanied by destruction of the Temple, enough to get the Second Coming underway?  By the year 100 the Second Coming was moved well into the future and was moving into the spiritual rather than material realm.)

In the Merovingian era (fifth through eighth centuries), the standard template-book on how to write a good letter suggested starting with something like, "We who live in the final days of the world...."  The disasters of the sixth century, the outbreak of the Black Death coupled with "years without a summer" (caused by volcanic dust blocking the sun), certainly had an end-of-the-world look to them.

But the world kept stubbornly on.  Interestingly, in spite of what they might have told you back in the year 2000, no one worried about the end of the world in 1000.  The "millennium" anniversary that got mentioned a lot instead was 1033, the anniversary of the Crucifixion, and here the hope was for a spiritual awakening, not the world ending.

The Albigensian heretics of southern France in the late twelfth and early thirteenth centuries were expecting the end of the world.  They got a Crusade preached against them and were thoroughly beaten by the northern French, but the world overall kept right on.

The big "world ending" moment for the Middle Ages was 1260, as I have discussed previously.  The theologian Joachim of Fiore (who died before 1260) had added up the generations in the Old Testament and had come up with the number 1260 as years from Creation to Christ's birth.  This was the "age of the Father," to be succeeded for the next 1260 years by the "age of the Son" and then by the "age of the Holy Spirit."  People became very upset, and bands of penitents wandered across Europe, whipping themselves and waiting for the end.  You can probably guess that they were mistaken.

Medieval Europe's second big outbreak of the Black Death, in 1346-48, was another apocalyptic event.  The world didn't end, but it sure got messed up, with maybe a third of the population dead, cities deserted, trade routes abandoned, and society (unsurprisingly) becoming much more morbid.

Fears of the world ending did not stop with the end of the Middle Ages.  The year 1666 was approached with trepidation, as it included the number 666, which the book of Revelations called "the number of the Beast."  When England experienced first another outbreak of the Black Death and then the great London fire that year, it sure looked apocalyptic.  Nonetheless, the world stubbornly persisted.

Apocalyptic predictions continue.  Remember how supposedly the ancient Mayans predicted the world would end in 2012?  A psychic now getting a lot of attention predicted the outbreak of a pandemic in 2020 (though when she predicted her own death she was off by 11 years).

The response to a failed apocalypse varies.  The most common reaction is to laugh it off and say one never believed it in the first place.  For true believers, disappointed not to have been caught up in the Rapture or whatever (note: the idea of a Rapture first appeared in the nineteenth century and has nothing to do with John of Patmos), the response is trickier.  One can say that the prophecy was right but the date was off (Who forgot to carry the 2?), but then it's hard to be believed next time.  One can argue that the prayers of the faithful averted the disaster that would have taken place without them.

For more on medieval society and religion, see my new ebook, Positively Medieval: Life and Society in the Middle Ages.

Email ThisBlogThis!Share to TwitterShare to FacebookShare to Pinterest
Labels: apocalypse, Black Death, end of the world, Joachim of Fiore, John of Patmos

As (justifiable) panic over Covid-19 spreads around the globe. some may be wondering:  did they have epidemics in the Middle Ages?  And what did they do about them?

Of course they had epidemics.  Any time you have a contagious disease and people living close together an epidemic is possible, that is infection spreading faster through a population than the population can handle it, accompanied by fear and despair.

The worst medieval epidemics were the two big outbreaks of the Black Death, the first in the sixth century, the second in the fourteenth.  The Black Death, now known as bubonic plague, killed maybe a third (or more) of Europe's population both times, having horrible ramifications for both economy and society for those who survived.  It's a bacterial disease so it can (now) be treated with antibiotics, unknown until the mid-twentieth century, but there was no good treatment then.  Covid-19 (which is viral, not bacterial, antibiotics won't touch it) is not nearly as serious, even though it's definitely serious (maybe a 4% fatality rate not 35%, though still far above the fatality rate of seasonal flu, which is well below 1%).

Although medieval people did not know about viruses and bacteria, they certainly could recognize contagion.  People fled the cities where disease spread much more rapidly, not appreciating that they might already be infected and were thus spreading rather than escaping disease--the same is the case today.  Medieval people understood about quarantine, and those not infected would try to stay well away from those who were infected.  Boccaccio's Decameron, now considered the first work of Renaissance literature, is a story of ten people self-quarantining and telling each other tales to pass the time.

Although the Black Death was the most serious medieval epidemic, others, like smallpox, came through periodically.  So did measles.  Both of these, especially smallpox, would leave disfiguring marks on your skin but would not (necessarily) kill.  Both of these, however, became devastating epidemics in the New World in the sixteenth century, killing a great number of indigenous people before the Europeans even had a chance to kill them themselves.

Medieval Europe certainly had a health care system, hospitals where sick people would be kept warm and dry and fed in the hope that their immune system would kick in soon, and barber-surgeons who could cut off infected limbs, but obviously these were ineffective against epidemics.  The image below is the interior of a medieval hospital at Beaune. 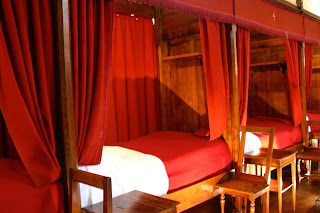 Patients would each have a curtained bed, and nuns would bring them chicken soup and saint dust.  Hospitals like this were overwhelmed in epidemics.

For more on medieval health and disease, see my ebook, Positively Medieval:  Life and Society in the Middle Ages.

Posted by C. Dale Brittain at 9:28 AM No comments: