In modern times, churches' light is provided by electricity.  Indeed, many medieval churches today have lights where the tourist puts in a euro to turn on the electricity and illuminate some interesting architectural feature for five minutes.  But in the Middle Ages churches of course had no electricity, and candles won't make up the difference.  The builders had to focus much more on sunlight coming into the church, which is why the windows and stained glass were so important.  Architects positioned their churches to take full advantage of the sun.

As I have noted previously, the altar ("choir") end of a medieval church was aimed (or "oriented") toward the east (the Orient), supposedly toward Jerusalem.  But what about the west end, you ask?

The west end was where the main doors of the church were.  As well as opening to let people in, these doors also served to frame the view from inside looking outside. 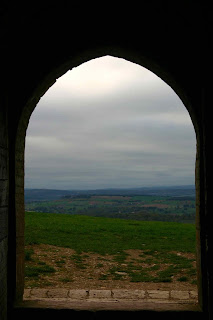 The image above is looking out from the church of Brancion, on a high hill in Burgundy, where the view is of the countryside.  At the cathedral of Clermont-Ferrand, in the Auvergne, the view is of the highest volcanic peak in the region, Mont d'Or.  Clearly the western view was also significant.

In fact, there is some indication that architects decided on the "east" on which they oriented their churches in part by deciding first on the direction of the main doors, to face west.  Most commonly true west was considered to be where the sun set at the summer solstice, the longest day of the year.

But when was the longest day of the year?  We look at a calendar and confidently say June 21.  But remember that medieval people were still on the Julian calendar, which got off by a day every century.  In cloudy Europe it was sometimes hard to say exactly when the sun set at the furthest north point and when its setting point started moving south again each day by a tiny bit.  So sometimes the doors would be lined up to face the setting sun at the solstice, and sometimes to face it on what they called June 21 and we would call the middle of July.

The other day's sunset to which church doors might be aimed seems to be Michaelmass.  This is the feast of the Archangel Michael, officially September 29, although it seems to have been intended to fall on the equinox a week earlier (and again, there seems to have been some difference of opinion whether to focus on where the sun actually was or on the calendar).  Michaelmass was an important day because it was when quarterly rents were routinely due.

Sometimes different architects had different ideas of east and west.  At the abbey church of Vézelay, for example, the eastern end was built first, in the early twelfth century, pointing toward what the architect thought was true east, but there's a slight kink in the church, because the western end, built a generation later, was done by an architect who had a different idea of how to aim west.  This second architect did do a very nice job of getting sunlight to come straight down the nave from the high windows at midsummer and to illuminate the carved capitals at the tops of pillars at midwinter.

For more on medieval churches and other aspects of medieval history, see my ebook Positively Medieval, available on Amazon and other ebook platforms.

Many people, including me, love medieval music.  It is evocative and powerful, most commonly religious but sometimes concerned with love or with just having a good time, but always different from later forms of music (baroque, classical, modern, popular) which it nonetheless heavily influenced.

Music in the Middle Ages was considered one of the “seven liberal arts,” the foundation of a good education, along with grammar, rhetoric, logic, arithmetic, geometry, and astronomy.  Medieval people invented the musical staff we now take for granted (the five lines on which notes are arranged).  They were an inventive lot.

Medieval music today is commonly discussed as though it consisted primarily of Gregorian chant, and indeed such chant was an important component but certainly not all.  Monasteries had monks routinely sing (or “chant”) the Book of Psalms, all of which were clearly written as songs and were believed to have been composed by King David of Old Testament fame.  There were also hymns to be sung as part of the Mass, for liturgical events (like a requiem), and for the celebration of various saints’ days.

It used to be thought that Pope Gregory I (d. 604) had written the music (“chants”) for all of these, though it has also been argued that Pope Gregory II, over a century later, was responsible for organizing and stipulating the music for certain purposes.  At any rate, once Charlemagne became Roman emperor in 800, his court adopted the Roman form of liturgical music rather than the form that had been previously used in the churches of Gaul.  Churches that could afford it started installing pipe organs, apparently invented in Byzantium.

Gregorian chant was sung in unison.  Ninth-century manuscripts might show the texts with little marks (called neumes) above them to show the overall rhythm and where one sang higher or lower, but essentially those singing learned the music from others.  But in the early eleventh century the musical staff first appears (as noted above).  Its invention was attributed to Guido of Arezzo.  Now one could look at written music and figure out the tune without having to hear it first. 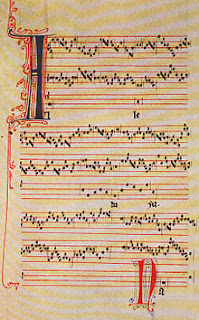 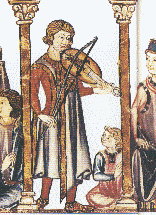 An enormous amount of medieval music was composed.  We know the names of some of the most revered medieval composers.  In the twelfth century the abbess Hildegard von Bingen wrote lovely music for her nuns to sing.  (She also had visions and wrote chiding letters to popes.  She has been taken up by New Age folks and had some of her music recorded with a drum machine line.  She rolls in her grave.)  Starting in the twelfth century, troubadours composed and sang all sorts of songs, of love and glory.  In the fourteenth century Guillaume de Machaut wrote love songs that were widely admired both then and now.

Those who study the history of music are called musicologists.  A number of them put together a book in the “Men and Music” series, edited by James McKinnon, called Antiquity and the Middle Ages (Macmillan, 1990).  It has a lot of good, technical detail on the development of medieval music.

For more on medieval culture and other aspects of medieval history, see my ebook Positively Medieval, available on Amazon and other ebook platforms.

Posted by C. Dale Brittain at 2:57 PM No comments: