But they still were anointed with holy oil at their coronations, ever since Pippin the Short (father of Charlemagne).  And as semi-sacral beings, they had certain God-given abilities.  The French kings of the High Middle Ages were believed to be able to cure scrofula with the royal touch.

Scrofula was a term used then for a variety of skin diseases, though the term now is restricted to certain infections of the lymph nodes, often associated with tuberculosis, in which the sufferer has black or purple growths on their neck.  Sounds nasty, and it is.

From at least the eleventh century on, French kings were assumed capable of healing this disease, which was therefore sometimes called the King's Evil.  People with skin diseases (and at this distance one can't really say if they all really had scrofula or something else) would petition for healing, and at certain times the king would allow them to approach and be touched with the king's touch.  Modern medicine may be rightly skeptical of how this could possibly lead to healing, but people certainly believed that it worked, because they kept coming back.

For a long time only the French kings could heal with their touch.  The English kings, the former dukes of Normandy, had nothing similar.  For that matter, the French kings were always treated with more reverence by their subjects than were the English kings, who couldn't even get along with their own family members and whose funerals sometimes degenerated into disgusting farces.

But this changed in the late Middle Ages, when several English kings married French princesses and thus gave their descendants the Royal Touch.  Right through the early modern period, both French and English kings would "touch" scrofula sufferers.  (The German kings were never so blessed.)

These days no one thinks of European or American rulers as semi-sacral.  Imagine the security issues if a president was believed to be able to cure diseases with his touch and had sick people lining up for treatment.

For more on scrofula and the kings, there's a whole book on the topic by the great French historian Marc Bloch, written in the first half of the twentieth century but still in print, The Royal Touch.

For more on medieval kingship and other aspects of medieval history, see my ebook Positively Medieval, available on Amazon and other ebook platforms.

Posted by C. Dale Brittain at 8:44 AM No comments:

It's November, time to talk about Saint Martin.  Between the election and Veterans' Day it's easy to lose track, but his feast day was November 11, and that day was an important one for medieval people, as rents and the like were often due then (at the end of the harvest).  In parts of Belgium they still have parades in his honor, and some children get presents from him, rather than having to wait for Saint Nicholas almost a month later.

As I noted earlier, although Gaul (France) by the late sixth century had a lot of saints, many of these are not quite as historical as one would like (and had not been revered until sixth-century bishops conveniently discovered their burial places).  But Martin (d. 397) is a historical figure, probably about the first historical saint of Gaul.

He originally came from what is now part of Hungary and was then part of the Roman Empire.  He appears to have converted to Christianity as a youth, just as Christianity was becoming widely tolerated and indeed encouraged in the Empire, but he was still expected to join the army, as all sturdy lads were supposed to do.  He traveled great distances with the troops, getting as far as Amiens, in northwestern France.

Here, according to legend, he had his most famous experience.  Riding along on a wet, cold night, wrapped up in his military cloak, he spotted a poor, ragged beggar.  Feeling sorry for him, Martin cut his cloak in two to share, as depicted centuries later in El Greco's famous painting (where, incidentally, Martin doesn't look anything like a Roman soldier). 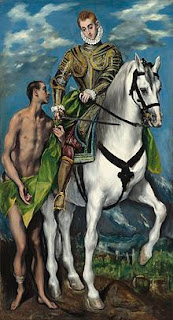 To his surprise and understandable shock, the beggar turned into Christ.  This got his attention, as it would certainly have gotten mine, and Martin decided to give up the army life for the religious life.

Monasticism at this time was just starting in the West, although it had been around in the eastern Mediterranean for a century.  Martin founded the first known monastery in Gaul in Tours.  He also became bishop of Tours; the story is that he didn't want to become bishop and tried hiding so they couldn't make him, but the geese among which he was hiding gave him away by honking.  He appears to have been a somewhat disturbing bishop, who followed a rough and simple life rather than the more comfortable life many of his contemporaries chose.

After his death, at least three churches in Tours all claimed precedence over the others on the grounds that Martin loved them best:  Marmoutier, the monastery he founded (the name is a variation of Martini monasterium, Martin's monastery); the cathedral where he had been bishop; and the basilica outside of town where he was buried.  Pilgrims would rub his stone sarcophagus to get saint-dust, until actual holes started appearing in it.

His cape (or at least the half that remained) became an important relic in its own right.  Around the year 900, in the aftermath of Viking invasions, the ancestors of the French Capetian dynasty became titular abbots of Martin's monastery and took the cape as their special possession.  Hugh Capet, first king of the dynasty in 987, got his nickname from the cape.

Martin is the patron saint of beggars, of clothing makers, and of geese-keeping.

Posted by C. Dale Brittain at 5:32 PM No comments:

It's Election Day in the US, a good time to blog about medieval elections.

Voting was the normal way to settle difficult issues in the church, where it was assumed that God would speak through the majority.  A unanimous decision of course was best, but a majority would work (or, as was sometimes said, the "wiser part").  Church councils settled such complex issues as the nature of the Trinity (Nicaea, 325) by getting all the bishops together and voting.  New church leaders, bishops, abbots (over monasteries), and popes were elected by those who would serve under them.

Even today new popes are elected by the College of Cardinals, the major priests of the city of Rome and the most important Catholic bishops from around the world, who are considered to represent the views and wishes of their flocks.  Sometimes there are multiple ballots before a consensus is reached.  Today the ballots are burned after each round of voting, and chemicals are added to give dark smoke if no one got the requisite two-thirds majority.  Those waiting outside are hoping to see white smoke, which means a new pope has been chosen.

Medieval kings were also elected.  There was no ballot box, no get-out-the-vote effort, and only a very tiny fraction of the population voted, but it was still an election.  When a king had died, the most powerful men of the country, including dukes, counts, and bishops, would assemble to elect a new king.  They were considered in some sense to "speak" for everybody else.  Kings would have liked to be hereditary, but they really only established the hereditary principle at the end of the Middle Ages.  Before then, the assumption was that a worthy king would have royal blood, but he still needed election.  (Kings were doubtless irritated that counts had held their offices by heredity since the tenth century.)

A king with an adult son could die in the happy hope that the great lords of his kingdom would elect his boy.  To make sure this happened, kings often had the election held while they were still alive and sitting there, in which case the younger man would become co-king with his father.  But the great lords were perfectly capable of electing someone else.  In England, after Henry I died without sons in 1135, the English barons promptly "forgot" their promise to elect Henry's daughter Mathilda as their king and instead turned to her cousin Stephen, who they hoped would be a weaker leader.

Medieval cities all had elected city councils from the twelfth century on.  Here any citizen of the city with a certain amount of property would vote.  The city council was very much representative democracy, a few fellow-citizens elected to represent the will of the (male) populace in running things.  City councils in fact preceded mayors, though most cities decided fairly early that a mayor, a single elected executive, made a lot of things function better.

Hope everybody got out and voted today!

For more on the medieval church and kings, see my ebook, Positively Medieval:  Life and Society in the Middle Ages.

Posted by C. Dale Brittain at 3:48 PM No comments: