Everybody loves King Arthur stories.  The sword in the stone, the Arthur-Guinevere-Lancelot love triangle, the tragic betrayal by Mordred, who is Arthur's nephew and son, the Holy Grail even before Indiana Jones and Monty Python got hold of it.

Medieval audiences loved these stories just as much.  There was a thirteenth-century preacher who noticed his audience dozing off and woke them all up by saying, "Once upon a time there was a king named Arthur."  (Once they were alert, of course, he chided them for preferring a story to a good moral lesson.)

Curiously, loving King Arthur stories has made many modern readers want to find the "historical Arthur" and attach the stories to him.  There actually seems to have been a historical Arthur, but he doesn't match what people want to find out about him.  The real Arcturus was a Romanized Briton, not a king (Britain had no kings once it was conquered by the Romans) but probably a dux, a war leader.  Arcturus is a good Roman name.  He would have also been a good Christian.

He would have lived in the late fifth/early sixth centuries, at the time that imperial Rome was pulling its troops out of the west and focusing on war with Persia (see more here on the "fall" of the Roman Empire).  The Angles and Saxons, Germanic peoples, came across the North Sea once there were no more pesky Roman legions in Britain, conquered, and settled.  The historical Arcturus seems to have fought to keep them at bay for at least a few decades.

This was the beginning of the period called (misleadingly) the "Dark Ages" in Britain.  The Romanized, Christianized population fled to the margins, Wales, Scotland, Ireland, Cornwall, the areas that still think of themselves as Celtic rather than Anglo-Saxon.  They remembered in story the mythical adventures of Arthur, who had once withstood those nasty English, but whose final brave defense ended in glorious failure.  There is some thought that the dragon, now a Welsh symbol and later attached to Arthur (Pendragon and all that), came from the dragons on Roman military banners. 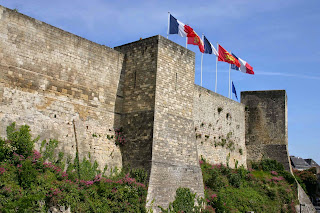 The idea of the glorious leader Arthur stayed alive over the centuries, but without any of the accompaniments now taken for granted.  Guinevere and Lancelot were first added in the twelfth century.  So was the Holy Grail.  Other aspects, like the sword in the stone, Mordred, the lady of Shallot, and Morgan Le Fay were added in the thirteenth and fourteenth centuries.  What we think of as the "standard" Arthur story was put together by Thomas Malory at the end of the fifteenth century, trying to organize and combine all the different stories in circulation.

Like modern audiences, medieval audiences wanted to believe Arthur was real.  In the twelfth century, the rather obscure monastery of Glastonbury "discovered" that Arthur and Guinevere were buried at their monastery.  Pilgrims flocked from all over.  Glastonbury is on a hill (a "tor") in a rather marshy region, which, without too much difficulty, could be equated with the "island" of Avalon.  It all made sense.

All medieval authors retold stories of Arthur as stories about their own period, making the weaponry, the castles, and the manners at court match what their audiences knew--except of course much fancier and bigger.  Nonetheless, they usually set these stories "officially" in late Roman Britain, only a few generations after Joseph of Arimathea had (theoretically) brought Christianity to the island.