Bridges seem self-evident to us.  There's a stream or river.  We want the road to cross.  We build a bridge.

But bridge-building, as any engineer will tell you, is far from simple.  It has to be strong enough to carry the load.  Unless it is very short, it has to be supported in the middle, which means putting pillars down into the river.  The pillars have to be sturdy enough to withstand the pressure of running water and probably ice and flotsam.  And then there's maintenance.  Covered bridges in the nineteenth century were built that way so that the roof would help protect the timbers.

Bridges were very important in the Middle Ages both for commerce and for communication.  One can kick a horse into a river and hope he swims faster than the river carries him away, but this doesn't work with a cart full of goods on the way to market.

Timber bridges were certainly found in the Middle Ages, but if possible they were built of stone, the roadway wide enough for a cart, with low walls on either side.

All market towns built bridges on the approach roads to facilitate merchants bringing goods to town.  These were usually operated as toll bridges, where those with the carts would willingly pay rather than hunt up and down stream for miles for a shallow ford.

Within a town there was almost always a bridge, because almost all towns were built on a stream or river.  The bridge made communication and commerce between both sides of the river much easier than they would have been otherwise.  Often a bridge would lie right below a castle or fortress, so that anyone crossing the bridge would know they should not even think of getting out of line.

Under the bridge, if the river was swift-flowing, mills were often build between the pillars.  On the bridge itself, if it was fairly long, little shops might become established. 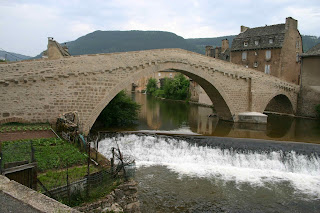 A surprising number of Europe's medieval bridges still survive after eight centuries or so, a tribute to the planning and workmanship of medieval engineers who did not have computers, slide rules, or even Arabic numerals.  These bridges are mostly now pedestrian-only, but some still take cars.  (The one above, located in Mende in south-central France, is pedestrian-only now.)

For more on medieval bridges and other aspects of medieval history, see my ebook Positively Medieval, available on Amazon and other ebook platforms.