Bestiaries were some of the most popular books in the Middle Ages.  A bestiary is a compendium of different kinds of animals, with a description and characteristics of each.  It was quite different from a modern natural history book (such "Handbook of North American Snakes" or the like) because it was based much more on ancient authorities than on direct observation, and because most of the animals presented a moral and religious message to the readers.

Bestiaries included normal European animals that everyone would know (dogs, oxen, mice), exotic but real animals that the authors would likely never have seen (lions, tigers, elephants), and fantastic ones, some of which scholars still haven't figured out (unicorns, eeales, paranders).  Many bestiaries were heavily illustrated.

The above is a medieval illustration of an elephant.

Medieval bestiaries took their origin in the Physiologus, a Christianized compendium of beasts that owed most of its information on animals to ancient Greek and Hellenistic sources.  Medieval authors definitely revered the ancients.

For most animals, there was a discussion of the name of the animal, often quite fanciful.  For example, a bee (apis in Latin) was said to be called that because it was born without feet (a pedibus).  (Actually bees are not born without feet.)  The stress on an animal's name was based ultimately on Genesis, where Adam named all the animals.  Attempts to explain a name's meaning had gotten a major push from the writings of the sixth-century bishop Isidore of Seville, who seems to have made a whole lot up.

The normal combination of imagined characteristics with moral messages may be seen in the example of the beaver.  According to the bestiaries, a beaver's testicles were useful for medicine, so if a beaver were pursued, it would bite off its own testicles and leave them for the hunters, thus making its escape.  This act, the bestiaries went on, shows that sinners should cut themselves off from all vice and shameful deeds, leaving them for Satan while escaping.  (They did not argue for self-castration.)  Similarly, bestiaries informed their readers that lynxes concealed (covered) their scat because their urine would harden into a jewel, and that the lynx represents a jealous miser.

A complete English translation of a famous thirteenth-century bestiary now at Oxford (MS Bodley 764) was done by Richard Barber, Bestiary (Woodbridge, England:  Boydell, 1999).  It includes all the original color illustrations. 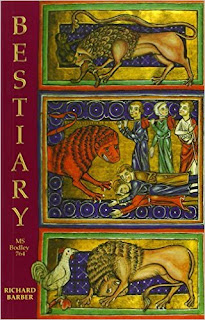 The cover reproduces the illustrations for the entry on lions.  The middle picture illustrates the assertion that if you lie down on the ground the lion will not bite you, and the bottom one the "fact" that lions are afraid of white roosters.

For more on the medieval animals, see my ebook, Positively Medieval:  Life and Society in the Middle Ages.

Email ThisBlogThis!Share to TwitterShare to FacebookShare to Pinterest
Labels: bestiaries in the Middle Ages, medieval bestiary