What are anti-popes?  They are people elected as pope, in defiance of other people electing someone else as pope, who are later decided not really to have been popes at all.  How can you tell the difference?  Well, at the time it's hard to say.  But the ones who won are, by definition, the real popes, and their opponents are the anti-popes.

As I've discussed earlier, the popes were mostly considered irrelevant until the second half of the eleventh century.  Once they became relevant, recognized as the real heads of the church hierarchy, anti-popes began to be elected.  (I guess it shows the importance of the papacy that it was worth having a big argument over who was really pope.)

Sometimes popes were elected as part of political quarrels, such as the quarrel between Gregory VII (pope 1073-1085) and Henry, German king and Roman emperor, where the two were engaged in the Investiture Controvery over whether pope or emperor was the ultimate authority in a Christian empire.  Henry chose an anti-pope and the pope chose an anti-emperor, and things went downhill from there.  That's an image of Pope Gregory VII below. 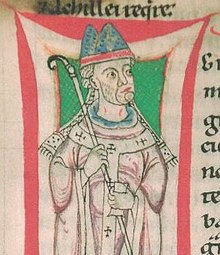 Sometimes there would be a disagreement within the college of cardinals itself over who to elect.  The cardinals have been the official only people to elect popes since the 1050s.  They are a "college" not like a university but rather in the word's original meaning, a collection of people making decisions (think Electoral College).  For example, in 1130 the electors split between two powerful cardinals, the one elected as Innocent II and the other elected as Anaclete II.  Both took the names of semi-legendary popes of the first centuries of Christendom (popes have, since the early Middle Ages, chosen new names that are intended to be significant).

Things were ugly for a while (Anaclete was accused of being Jewish, among other things), but most of Europe followed Innocent, including the French king.  This split was finally resolved when Anaclete died (1138), and his followers made their peace with Innocent.  This was the normal pattern:  one side or the other would lose support, and there wouldn't be more than one anti-pope before reconciliation.

But the biggest split was in the fourteenth and fifteenth centuries, when during the Great Schism there were first two and then three popes, at Rome and Avignon and Pisa, over a period of close to forty years.  Stay tuned for more details.

For more on the medieval church, see my ebook, Positively Medieval:  Life and Society in the Middle Ages.  Also available in paperback.