People sort of know what a commune is.  A group of hippies all living together in a big house, right?  And (in popular imagination) probably engaged in a lot more exciting activities than going to work and soaking the chick peas for supper, which surely occupied a lot more time, realistically.

The Middle Ages didn't have hippie communes but it certainly had communes, by which they meant sworn alliances of people governing themselves.  Working together as a community was an essential part of medieval society.  Monasteries, castles, and villages functioned in many ways like big families, and communes were part of this trend.

Urban communes developed at the same time as cities started growing in the twelfth century--the eleventh century in Italy.  A tiny city that had been dominated for centuries by count and bishop would, as it grew in population and became the home to many merchants and artisans, have its citizens decide they needed to be self-governing.  A commune would be set up, sometimes with the support of count and/or bishop, sometimes against their opposition.  These three major entities (count, bishop, merchant/artisan commune) would then have to work out some sort of agreement among themselves over issues like judging and tolls.

In France, the kings often supported the foundation of communes in various cities.  There are clear indications that money changed hands in the process.  It would be hard for a local authority to try to dissolve a commune when they had a royal charter.  The French kings, however, never allowed a commune in Paris.

Communes started with city councils, to make important decisions, and with judges or magistrates, to judge disputes between townspeople and punish malefactors.  Judges would be citizens of the city.  By the late twelfth century, most cities also had a mayor, a single elected individual who would be able to make decisions on crucial issues more expeditiously than could the whole city council.

Although city communes have gotten most of the scholarly attention, peasant villages had them too.  Here the beginning was the village of Lorris, not far from Paris, where the local landlord wanted to attract new settlers to his land and promised them a commune in return for settling there.  The "customs of Lorris" were approved by King Louis VI at the beginning of the   twelfth century and reconfirmed by his son and grandson in the following generations.  These customs were seen by all parties as symbols of liberty, because they gave the peasantry the authority to regulate disputes themselves and specified that the landlord could expect certain annual payments but not impose what the villagers considered arbitrary demands and taxes.  The customs of Lorris were widely copied in other villages.

This demonstrates what can be called peasant agency, the ability of peasants to make their own decisions or, at a minimum, fight back against what they considered oppression.  Medieval peasants might have lived in what we would now consider intolerable conditions (dirt-floored huts, no modern sanitation or modern medicine, back-breaking work), but they were neither silent nor passive.

In one well documented quarrel between the count of Nevers and the abbey of Vézelay, in Burgundy, both sides turned to the peasants and villagers of Vézelay for support.  The count, weeping what a monk of the abbey called obviously false tears, said that he was saddened to see the peasants so oppressed by the vile abbot, and he promised them a commune if they would forswear allegiance to the abbey and be his men instead. 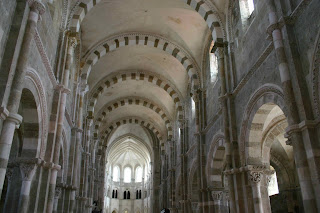 (The image above is the interior of the church of Vézelay, as it would have looked at the time.)

The abbot in turn made a number of insulting remarks about the count and reminded the peasants that they had promised to be faithful to him.  Nonetheless, lured by the promise of a commune, the peasants threw their allegiance to the count, who promised to protect them from the "evil" abbot and who appointed magistrates and city council members from among their numbers.

The quarrel continued for a year, with many twists and turns, the intervention of two cardinals delegated by the pope, councils, threats, the abbot sneaking out of Vézelay claiming his life was in danger, various excommunications, and the like.  It was finally settled by compromise (as were most medieval disputes), with the peasants giving up their commune but getting the abbot to agree to drastically roll back what he had been demanding in dues.  The point is that peasants and townspeople were entirely capable of making the powerful pay attention to them and make concessions to them.  After all, they outnumbered them.

For more on medieval peasants and townspeople, see my ebook, Positively Medieval:  Life and Society in the Middle Ages.  Also available in paperback.