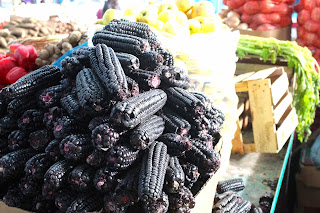 Corn is now pervasive in the American diet.  You may start the day with corn flakes.  If you eat store cookies or drink soft drinks or put "maple flavored" syrup on your pancakes, look at the label--the chances are excellent that you will see corn syrup used as a sweetener.  (Medieval people didn't even have sugar for the most part, much less corn syrup.)  Puddings, sauces, and pie fillings are thickened with corn starch.  Corn bread is made of corn meal.  Corn tortillas of course are made of corn, and indeed tortillas were a part of the diet of Mexico and the American southwest long before the Spaniards arrived.  Corn, both the ears themselves and the stalks, are now chopped and fed to cattle.  Most of our beef cattle are fed a heavily corn-based diet to fatten them up.  Corn is also used to make ethanol, which is added to most gasoline.  Right now fresh corn on the cob is just starting to appear in farmers' markets in the northern part of the US, but this is a tiny fraction of where corn ends up.

For more on medieval food, see my new ebook, Positively Medieval: Life and Society in the Middle Ages.  Also available in paperback.