Tomatoes and potatoes are a major staple of the modern American diet.  It's September as I write, and the crops of both have just come in.  Between French fries, baked potatoes, mashed and boiled potatoes, some people eat potatoes every day.  Potato starch is found in many other prepared foods.  Tomatoes are now found in everything from salsa to salad to ketchup to pizza to spaghetti sauce.

And yet, as I noted in a previous post on the medieval diet, these foods were unknown in the Middle Ages.  They are native to South America, not Europe.  Yet they have become such an integral part of the European as well as American diet that it may be hard to realize what dinner might have been like without them. 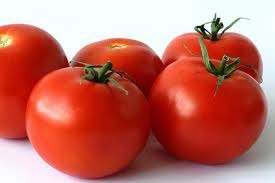 Because tomatoes are related to deadly nightshade, the (quite logical) assumption was that they were poisonous.  They were introduced into Europe as an ornamental plant, with attractive red fruits, and it was a couple of centuries before anyone tried eating them.  Once it became clear, however, that one would not keel over from a bite of tomato, they became very popular.

But how, you ask, did the Italians eat spaghetti without tomato sauce?  They would have eaten it with olive oil, cheese, maybe some mushrooms or other sautéed vegetables.  Pizza was the same thing--a piece of bread dough topped with olive oil, maybe some olives and cheese.  In fact, in Italy even today, pizza is often such a simple dish.  The deep-dish, meat-lover's, extra-toppings, extra-cheese pizza is uniquely American.  (And don't even get me started on pineapple and chicken wings as pizza toppings.)

It did not take long, however, for Italians to recognize the possibilities of tomatoes in sauce, once they were proven non-poisonous.  Because the Italians had made much of their flour into pasta rather than bread, they saw potatoes, once they were introduced, as something else to top with an interesting sauce.  This means that Mediterranean dishes based on potatoes, even today, are more imaginative than northern European dishes.  There potatoes were seen as a substitute for bread, and once you put butter on them there wasn't much else to do (sour cream instead of butter is not a big difference).

Incidentally, there is a common myth that Marco Polo brought pasta back from China.  This is completely false.  Marco Polo, a late medieval Italian explorer, did indeed make it to China, where he commented, for example, that some of the Chinese he encountered did not seem to know at all about bread, subsisting solely on vermicelli.  The vermicelli, of course, were noodles, and Marco gave a common Italian term for them.  He and his compatriots knew all about noodles.  Because the word means, literally, "little worms," a joking reference to their appearance, he is highly unlikely to have said that the Chinese ate worms instead of break, much less have decided to introduce Italy to such worms.

The myth that he introduced Italy to pasta with a Chinese import was in fact created in the early twentieth century, when an American noodle company created this "hilarious" story as part of an ad campaign.