I heard on the radio the other day that the average American eats 22 teaspoons of sugar a day.  That includes actual sugar, plus all the corn syrup in soft drinks, store cookies, etc., and it's certainly startling. I think I have just discovered the Mystery Reason why many Americans are packing a wee bit more weight than they'd prefer….

Medieval Europe did not have sugar, not cane sugar, not beet sugar, certainly not corn syrup, because corn (maize) is a New World plant.  Sugar cane was found occasionally in the Middle East, and Crusaders were quite excited about it, but it wouldn't grow in Europe's climate and was too expensive to import.  (The image below is cut sugar cane.) 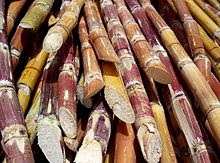 Yet medieval people, like most modern people (yes, I know, there are exceptions), liked things that were sweet.  This is indeed genetic.  Our ancestors roaming across the veldt of Africa, rarely getting enough to eat, knew that something sweet contained calories.  Well, they didn't know about calories specifically, but they knew feeling well-fed.  Evolution favors those who get enough calories to live and pass on their genes.  ("It's not my fault I'm a bit plump," one can say, "it's all those semi-starved ancestors forcing me to finish off the chocolate cake.")

But the principal sweetener was honey.  A manor would generally have a beehive, carefully tended.  A feast would not be complete without a sweet dessert, such as milk pudding with honey and raisins.  Peasants would not normally keep bees, but they could hope to find wild honey in the woods.

The European honey bee, the same one used for honey in the Middle Ages, is used today to pollinate fruit crops in the US and to make most of our honey.  The bees are however threatened by "colony collapse," a disorder that kills off entire hives and is not well understood.  This could be a disaster not just for those who like honey in their tea (tea is not medieval, by the way) but for commercial orchards.

One distinct advantage of having less sugar in their diet was that medieval people's teeth had far fewer cavities than do modern people's.  (Click here for more on the medieval diet.)

For more on medieval food, see my new ebook, Positively Medieval: Life and Society in the Middle Ages.