It's January!  The coldest month of the year in the northern hemisphere.

January is named for Janus, a Roman god always depicted as having two faces, one looking forward and one back.  He was the patron saint of doors and doorkeepers (a 'janitor' was originally someone who kept watch at the door, even though we now think of janitors as being those who clean the restrooms and keep the furnace burning). 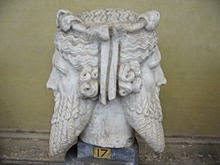 Janus was also the god of New Year's celebrations, both looking back toward the old year and forward toward the new.  The Romans, like us, celebrated New Year's on January 1.  Although the shortest day of the year (now December 21), the birthday of the sun-god Apollo (December 25 in the Roman calendar) and New Year's were all originally supposed to recognize the slow return of daylight after midwinter darkness, as discussed more here, in practice, due to the difficulties of calculating leap year, they have drifted apart.  More excuse for parties!

The Romans (like us) celebrated January 1 with feasts, drinking, getting together with friends, and general rowdiness.  This was a continuation of Saturnalia, which was the rowdy week honoring the god Saturn, leading up to the shortest day of the year on December 25 in the Roman calendar.  One assumes they got over their hangovers in the week leading up to January 1, just in time to start over.

Romans also exchanged gifts on New Year's, a practice that much later migrated to Christmas.  In the Middle Ages, gifts on January 1 were the norm, even though preachers routinely told people that such gift-giving was a pagan practice.

This was all complicated by the fact that medieval people did not all celebrate the New Year on January 1.  In fact, the most common practice was to celebrate it on Easter, which does make theological sense, even though you could end up with a year with two Aprils, if Easter was early one year and late the next.  Christmas was also a possibility for the official start of the new year, as was the preceding March 25, commemorating the Incarnation (i.e. when Mary became pregnant).

Thousands of generations of little fuzzy ancestors tell us to spend January snoozing in the nest, maybe going out occasionally to bring back more seeds to munch.  We might as well enjoy ourselves before settling down for a "long winter's nap."

For more on the medieval way of thinking about the year, see my new ebook, Positively Medieval: Life and Society in the Middle Ages.