The Capetian dynasty is the longest line of kings in the world, with straight, father-to-son inheritance from Hugh Capet, king of the Franks in 987, through eight centuries of French kings, to the modern kings of Spain.  (The queen of England claims the ninth-century King Alfred and even the legendary Hengist and Horsa, leaders of the Anglo-Saxon invaders of Britain in the fifth century, among her ancestors, but there are a lot of detours in between.)

The Capetian family, who had originally held power in the Rhineland, gained power in France in the ninth century leading the resistance against the Vikings.  The Carolingians, the descendants of Charlemagne, provided little leadership (and the German branch of the Carolingians soon died out), so there were several kings in the family as well as counts and dukes before Hugh Capet was elected king of the Franks (see here for more on royal election).  Modern scholars call his family "the Capetians" in his honor. 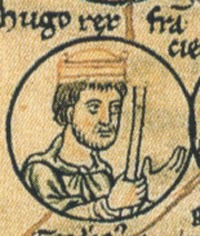 Capet was later taken as a last name, but people did not have last names in the tenth century.  Capet was rather a nickname, to keep him distinct from other men named Hugh.  It means "little cape," and he had the nickname because he was abbot of the monastery of Saint Martin (yes, powerful laymen at this time often appropriated monasteries).  Saint Martin was the Roman soldier-saint who had supposedly seen a beggar cold and wet by the road and given him half his cloak (cutting it in two with his sword).  When the beggar transformed into Christ, Martin was understandably surprised and took up a religious life at once.  The monks of his monastery preserved the half a cloak he had left as a relic.

The Capetians had been counts of Paris before becoming kings, which is why Paris is now the capital of France.  Initially they had less power and property than a lot of their dukes, but they had ambitions.  At the end of the eleventh century King Philip I named his son Louis, which was a much more royal-sounding name than Hugh or Philip or Robert, which is what men in the family had previously been called (there was also a Megingoz back there, but let's not worry about him.)

Supposedly Philip I and his queen had been praying for a son, and a wise old hermit they visited blessed them, told them to expect a son, and gave them permission to call him Louis.  Louis was the name of Charlemagne's heir and also the name of the first king of France of the Merovingian line back in the fifth century (who is usually called Clovis in French or English--put C on the front of Louis and see what you've got--even though he probably called himself Chlovodech).  From then on until the French Revolution, almost all French kings were named Louis or Philip (especially Louis), with the exception of the occasional Charles or Frances or Henry.

Philip II (1180-1223) is now considered the creator of modern France.  Nicknamed Augustus, he drove the kings of England out of Normandy and consolidated royal rule.  He also got into major trouble for trying to divorce his wife, Ingeborg of Denmark, but that's a different story.

For more on medieval kings, see my new ebook, Positively Medieval: Life and Society in the Middle Ages.