Even if a person knows very little medieval history, they have almost certainly heard of Charlemagne.  "He was great or something."  (That's right, the name means "Charles the Great," the great-part from the Latin magnus, as in 'magnum'.)

The real Charlemagne was king of the Franks from 768 to 814, king not only of what is now France but also of much of western Germany and the Benelux countries.  He was also king of Lombardy (northern Italy) in at least his own mind, though the Lombards had doubts.  He is now imagined as "father of Europe," and there is a statue of him at the European Union headquarters.  Given that he became king of all these territories through conquest, and that his biographer was very irritated with the Germans who refused to stay conquered, maybe we shouldn't press this analogy too far.

In the year 800, Charlemagne was crowned Roman Emperor by the pope.  Now you'll recall from earlier posts that the capital of the Roman Empire had moved in the fourth century from Rome to Constantinople (what is now Istanbul, in Turkey).  There were intermittently independent emperors in Rome as well as Constantinople for over a century, but from the 470s on, the Roman Emperors, the heirs to the Caesars, were solely in the Greek East (Constantinople), where they remained until their empire finally fell to the Turks in 1453.

In part the popes owed him one.  Early medieval popes were quite weak and little respected, and the pope of 800 had been having terrible trouble with the Lombards.  He also had decided that the current Emperor in Constantinople was a heretic.  Irene, the emperor, was also a woman, which only made it worse.  She believed that the Ten Commandments forbidding "graven images" meant that one could not have images in the church and was thus an "iconoclast," one who broke up such images.  (This is very depressing to art historians.)  This was not at all how western theologians and the pope interpreted the Ten Commandments.

Feeling that the imperial throne was thus vacant, the pope announced that Charlemagne was the only true emperor and crowned him on Christmas Day 800 in the church of St. Peter's in the Lateran. 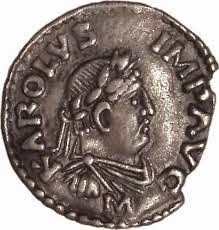 On the one hand, this was great, Charlemagne and his descendants (known as the Carolingians, from Carolus, the Latin version of the name Charles) got to call themselves emperors.  But a precedent had been set, that one was not really an emperor until crowned by the pope, which gave the pope power at least potentially.  The bases of the eleventh-century crisis of church and state were laid down.

A thousand years later, Napoleon remembered this all too well and refused to be crowned emperor by the pope, instead snatching the crown from the pope's hands and crowning himself.

Charlemagne himself had doubts about the whole procedure, mostly because he was concerned about the Greek Roman Emperors.  He seems even to have asked Irene to marry him, hoping to resolve it that way.  But she died quickly, and her successor, a man, basically told Charlemagne that if he wanted to call himself emperor in the God-forsaken northern European forests, where they didn't even speak Greek, he was welcome to do so.

The image is from one of his coins.  To the left, behind his head (crowned with laurel like a Roman), you should be able to read his name, Karolus.