In the modern West it has become common to have what used to be called old folks' homes (not to be confused with the Stephen Foster song about "old folks at home").  These assisted living facilities, senior centers, nursing homes, or the like have become necessary due to a lot of people growing older and less able to care for themselves easily, and in many cases not having anyone able or willing to care for them at home.

With the pandemic these facilities, where a lot of older people with health problems live close together, have tragically become centers of spreading the disease.  But how about the Middle Ages?  Did they have old folks' homes?

No, because most people died before they had become so incapacitated that they would have needed such a facility.  Without modern medicine, diseases or chronic conditions that can now be handled would have carried people off.  With life a lot rougher physically, even for the well-to-do, the average life expectancy was probably more like lasting into ones 50s or 60s, rather than the 70s or 80s we now assume.  (Of course then, as now, these are averages, with some living much longer, some much less.)

Families were expected to take care of the older generation, once the next generation was ready to take over the work, and grandparents provided advice and insights as well as assistance with less strenuous tasks.  The modern Amish still practice something similar, with grandparents moving into a little adjacent house once the next generation is grown, married, and ready to take over the farm.

But there were still institutions in the Middle Ages that served some of the same functions as a retirement home.  The chief was the monastery or nunnery.  Someone (usually aristocratic) who no longer was active and had started to worry about their soul would convert to the religious life, making a suitable gift, taking the habit, and leaving their possessions and family behind.  The new, strict orders of the High Middle Ages, like the Cistercians, required these converts to become novices, following a rigorous schedule to learn all about the monastic life.  Other monasteries provided a (reasonably) comfortable home where older people could pray and hope to make it into heaven. 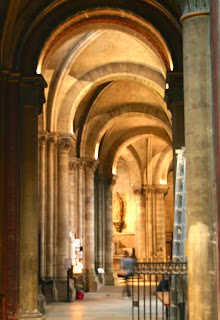 These were group facilities, but rather than just being homes for the elderly, they were communities that included all ages down to teenagers, and at a lot of traditional monasteries, down to childhood. 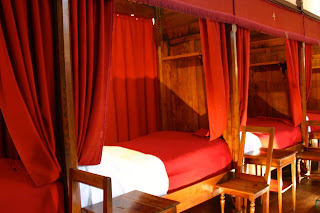 Alternately, one could go into a hospital.  Medieval hospitals became common from the thirteenth century on, founded as an act of charity by the wealthy and powerful.  The hospital of Beaune, pictured above, was founded by the most powerful lords of Burgundy.

These weren't really retirement homes, however.  They were places for the sick, the indigent, and the dying (more like a hospice).  The nuns would however try to heal the sick.  Chicken soup and saint dust are great cure-alls.

For more on medieval social history, see my ebook, Positively Medieval:  Life and Society in the Middle Ages.  Also available in paperback!