At the same time as TV shows and magazines are telling us to simplify, to get away from commercialization and overspending and discover "the true meaning of Christmas," we are also being constantly urged by the same TV and magazines to buy lavish presents, especially for the children, though expensive electronics and jewelry seem aimed more at the adults.

(I discussed this in my short book, "Contested Christmas," available on Amazon and other on-line book sellers.) 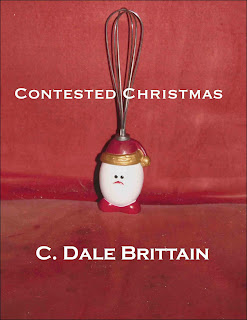 But how about the Middle Ages?  Did they have presents and commercialization?

They certainly had presents.  But they were not on Christmas!  Christmas was a time of religious observance.  The "twelve days of Christmas" however were observed, close to two weeks of feasting and merriment.  On the Feast of the Innocents, December 28, there would be special festivities dedicated to children.  This day was sometimes called Feast of Fools, a day when children would get to play the role of adults.

Presents showed up on January 1, New Year's Day.  The Romans had celebrated the first of January with presents, and there were periodic attempts in the Middle Ages to ban presents on New Year's as a pagan practice, but that didn't stop anyone.  These presents were usually exchanged between close friends or between spouses or lovers.  They were not "commercial" in that they were not made in a factory or advertised on TV, but you could certainly go to an artisan in a medieval city and buy jewelry or shoes or a new knife.  The gift-giving season might also be extended to January 6, Feast of the Wise Men, when the Three Kings were supposed to have arrived in Bethlehem and made gifts to the baby Jesus.

The Christmas-New Year's season was also when the powerful gave gifts to their underlings.  This was different from the normal practice the rest of the year, in which the powerful expected the weak to attempt to curry favor with them in part by offering presents. 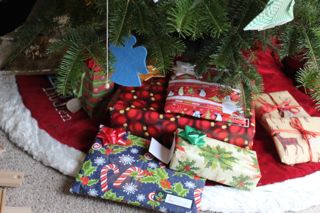 Christmas presents with a focus on children really began in the nineteenth century, as did the modern version of Santa Claus.  Christmas had become a hard-drinking holiday, and there was a concerted effort to make it more friendly, home-centered (rather than tavern-centered), celebration.  Focusing on the children meant much less focus on the liquor.  Wrapping presents in colorful paper not only led to a surprise but took them out of the ordinary:  a present is something special when you have to unwrap it, not like just being handed a new shirt or a book or a toy.

For more on medieval holidays and social history, see my ebook, Positively Medieval:  Life and Society in the Middle Ages.  Also available in paperback!

Email ThisBlogThis!Share to TwitterShare to FacebookShare to Pinterest
Labels: Christmas in the Middle Ages, Feast of the Wise Men, history of Santa Claus, medieval Christmas, origin of Christmas presents