Most people probably only think about him in relation to the King Wensceslas song, which is always treated as a Christmas song, even though it doesn't mention Christmas, just "the feast of Stephen."  Since his feast day is the day after Christmas, it all makes sense.  The song is all about how the rich should remember and help the poor, which is a repeated motif in many old Christmas songs, although there seem to be a lot of people who lose track of that.

The day after Christmas is called Boxing Day in Britain and much of the old British empire.  This has nothing to do with hitting each other with puffy gloves.  Rather, it has to do with boxes, service people going around with boxes hoping for tips from folks they've served all year.  Maybe in the spirit of Wensceslas?

But I digress.  The original Stephen is in the New Testament.  Stephen may not even actually have been a name then (though it quickly became one), as in Greek stephanos meant honor or glory.  He is often called "protomartyr," meaning first martyr, because he is the first person recorded as being put to death for his Christian faith.  In the Book of Acts he is one of the followers of Peter and the rest of the original Apostles and is stoned to death by the Jews for following this disruptive set of ideas.  Saul of Tarsus, who later became Saint Paul and one of the leaders of the early church, was said to have witnessed the stoning and been disturbed by it.

(In the Middle Ages there were even earlier martyrs celebrated, the Holy Innocents, all the baby boys Herod was supposed to have killed in trying to kill Jesus.  But Stephen still got to be a protomartyr.  The Innocents were celebrated on December 28.)

Though Stephen was killed long before the New Testament was composed, he was often depicted holding the Gospels, as in the image below.  Also note the stones. 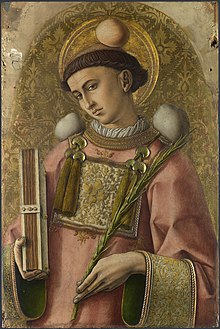 As well as being the first martyr, Stephen was one of the first saints to have his bones discovered, treated as relics, and have churches named for him.  This happened at the beginning of the fifth century, nearly 400 years after his death.  After his relics, buried outside Jerusalem, were revealed in a vision, they were moved into a church on December 26, which is why today is his feast day.

Bits of his bones were sent to various other parts of the Roman Empire (which, you'll recall, was officially Christian at this time).  Saint Augustine of Hippo, a bishop in North Africa and one of the main theologians of the early western church, had originally been skeptical about relics, but he was impressed with the miracles these relics performed.

In the following decades, a great many churches were named for Stephen.  Originally churches had not been named for saints, but now they started to be.  In France St.-Etienne (Saint Stephen) is a very common designation for a cathedral church.  An old baptistry church, originally separate from the cathedral, would be named for Saint John the Baptist (St.-Jean) for obvious reasons, but the other French churches of the fifth and sixth centuries were generally named for local saints.

For more on the medieval way of thinking about saints, see my new ebook, Positively Medieval: Life and Society in the Middle Ages.  Also available in paperback.