We think of queens as wives of kings, as of course they were, but they also were rulers in their own right.  After all, Elizabeth II has been queen of England for going on for 70 years.  Let's not forget the sixteenth-century Elizabeth I.  There were ruling queens in the Middle Ages as well.  And even as wives of kings, queens exercised real power.

Okay, Eleanor was unusual.  But for all medieval queens, they functioned as the power behind the throne.  They would have their own separate court, with their own faithful men.  Here they were entirely capable of advancing their own policies, which might or might not be the same as the king's.  Eleanor plotted against Henry II on behalf of her sons, who felt that Dad was not giving them what was Rightfully Theirs.  (Teenagers, they never change.)  Even when not working in opposition to the king, the queen could be a real power.  Someone who wanted a special favor from the crown might do well to start with the queen, figuring if she agreed, she could be a significant ally.

(First ladies, wives of presidents, have separate offices and staff, but people rarely go to them to get a special favor out of the president.  Maybe they're missing a bet.) 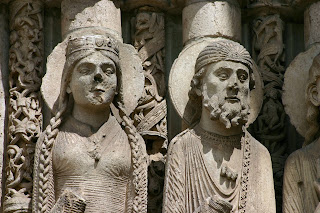 The above image is a twelfth-century depiction of a king and queen of the Old Testament, carved onto the facade of Chartres cathedral.  Not surprisingly, they have sort of a twelfth-century look to them.  That queen isn't going to stand for any nonsense.  I think she may be taller than the king, who looks worried.

Then there were ruling queens.  The mother of Henry II, Mathilda, thought of herself as ruling queen of England, though her cousin Stephen begged to differ, and the two carried out a long civil war.  (Stephen won by outliving her.)

The most famous ruling queen is probably Isabelle, of Ferdinand-and-Isabelle, who sent Columbus off on his crack-brained attempt to get to India by sailing west.  Isabelle was king (not queen) of Castile, the northern part of what is now Spain, as well as queen of Aragon (the eastern part of Spain), a position she gained by marrying King Ferdinand of Aragon.  (I don't think he was queen of Castile.)  They called themselves the "Catholic kings."

For more on medieval social and political history, see my ebook, Positively Medieval:  Life and Society in the Middle Ages.  Also available in paperback!

Email ThisBlogThis!Share to TwitterShare to FacebookShare to Pinterest
Labels: Eleanor of Aquitaine, Henry II of England, kings and queens, medieval queens, queens in the Middle Ages