Since this is Columbus Day weekend, I am blogging about Christopher Columbus and the discovery of America.

Good old Colombo (as he was probably known at the time) used to be a major hero, which is how he got a Day.  When I was a kid, textbooks often portrayed him as blond and rather Anglo-Saxon looking, which would doubtless have puzzled an Italian who sailed under the sponsorship of Spain.  The "America" he discovered, it was suggested (though never actually said), was the United States.  No wonder he was a hero! 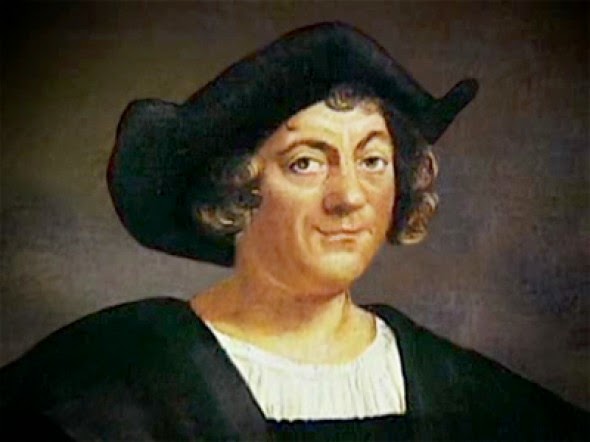 Now in fact it's perhaps something of a misnomer to say he "discovered" the Americas, given that the natives knew the whole time that these continents were here.  They looked around, and there they were!  The America Columbus discovered was also not the US but almost certainly Hispaniola, the island that now is home to Haiti and the Dominican Republic.

Columbus really was important for proving to Europe that the "outer sea" did not go all the way around the globe, but that there were continents in the middle.  Everyone of course knew the earth was a globe, as I discussed earlier.  Columbus was sailing west in order to find a "shortcut" to India, which is why he called the natives Indians.  He insisted he had indeed gotten to Asia, but no one paid any attention, realizing instead that he had stumbled onto a New World.  Less than five years later the Spanish and Portuguese kings were dividing up the planet at the Treaty of Tordesillas, Spain claiming the New World, everything that lay west of a line down the middle of the Atlantic, Portugal claiming what lay to the east, that is Africa and Asia.

(In fact, although they didn't realize it at the time, the treaty line through the Atlantic sliced through what is now Brazil.  Portugal insisted that Spain observe the original treaty, which is why Brazil is Portuguese-speaking, unlike the rest of Latin America.)

Columbus was also not the first European to reach the Americas.  Legends of the Irish Saint Brendan said that he made it across the Atlantic in a boat made of oxhide--and miraculously made it home again, in spite of whales coming to rub against the boat.  More prosaically, Portuguese fishermen fished the Grand Banks and may well have gone a bit further west to the mainland.  Icelanders (Viking descendants) got as far as the Canadian Maritimes in the year 1000, though at most they seem to have over-wintered before deciding this was too far and heading home.  (This has not kept Scandinavian-descent people in places like Minnesota from finding "authentic" rune-stones with deeply meaningful inscriptions like "Eric was here.")

Even if not an Anglo-Saxon who discovered the US, Columbus certainly marked a major transformation.  If one wants to date "the end of the Middle Ages," 1492 is a good year to choose.  Europe discovered a whole new area to exploit and to influence with its culture.