What's a cathedral chapter, you ask?  It's the body of priests attached to a cathedral, who helped the bishop run the diocese.  As I noted in my post on bishops, they began as the head Christian of their region (diocese).  Administrative responsibilities meant that, essentially from the beginning, they needed priests to assist them. 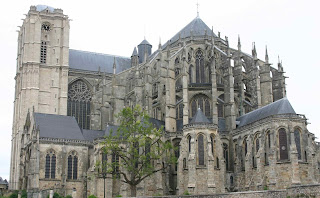 The cathedral chapter was made up of "secular" canons as they were called, in distinction to "regular" canons, those who (like cathedral canons) served a church in a body, reaching out to the broader community, but who followed a strict rule that required them to live in common, sharing their possessions, their dormitory, and their food.  (Click here for more on canons regular.)  Cathedral canons lived essentially pure lives, at least by the end of the eleventh century (earlier they had often been married, or at least had a live-in partner), but they did not believe in sharing.

The most important officer of the cathedral chapter was the dean, elected by the canons.  He stood up to the bishop if he felt that the chapter's rights and privileges were being violated.  Other officers included the chancellor, responsible for the school and the archives, the provost, who oversaw the chapter's property, and the cantor, who led the singing in the cathedral--something cathedral canons did every Sunday, if not more often.