As I noted in an earlier post, the basis of the medieval diet for both peasants and aristocrats was bread.  Low carb, gluten free, and "paleo" diets would have seemed completely bizarre.  I guess people with celiac disease, full-blown gluten allergy, would have been in serious trouble in the Middle Ages. 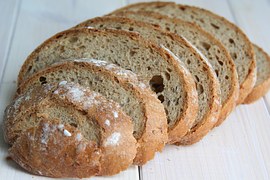 Ideally bread was made from wheat, but rye and barley were also used, especially in more northern climates where wheat did not grow as well.  Medieval wheat was "winter wheat," planted in late fall, so it would grow very slowly over the winter and then quickly in the spring, being ready to harvest in early summer.  Rye and barley, on the other hand, are planted in the spring and harvested in the fall, so they could supplement a poor wheat harvest.

Wheat, and other similar grassy grains, produces a seed head which is both the grain we eat and the seed for next year.  The medieval farmer always hoped to get a lot more grains of wheat back than what he planted.  In modern agriculture, the ratio is generally 20 to 1 or better, grains harvested to seeds planted.  The return for medieval farmers, without modern fertilizers or specially developed strains, was much worse. They especially feared getting down to a ratio of 2:1.  With a 2:1 ratio, one harvested two grains for every one planted.  That meant you ate half the crop and saved the rest for seed for next year.  Probably half the crop wasn't enough food to last all year.  Then you ate some of the seed, meaning not enough to plant for next year.  Starve now, or starve next year.

Wheat had to be threshed, that is beaten, to get the seeds off the stems, then the "wheat was separated from the chaff" (people in Biblical times had the same issues).  Preferably one's bread didn't end up with bits of stem or seed coating.  However, the wheat germ was not removed, as in modern white flour.  What medieval people called white bread was all-wheat (as opposed to partly rye or barley), with no bits of chaff left in to make it more filling (but less nutritious).

There was a thirteenth-century story of someone asking to become a monk.  As part of the process of joining the monastery, he was asked why he sought the monastic life, with the expected answer something like, "To honor God and atone for my sins."  But he answered, "I want white bread and plenty of it!"  (Monks kept the chaff out of their bread.)

Wheat had to be ground into flour before it could be baked into bread.  Once wind and water mills replaced the hand mills that had been used under the Roman Empire, a big sack of grain could be quickly and efficiently made into flour.  Bread had to baked every day, because (like bread in modern France) it would stale very quickly.  It was all sour dough bread, because there were no handy little foil packets of yeast.  The ingredients were just flour, water, and a little salt.

People could bake their own bread, but most villages had a bakehouse, where one could buy one's bread.  Indeed, bread was the one food that peasants would regularly buy rather than produce themselves.  (They could sell their flour to the baker.)  The bakehouse and the brewhouse, where beer was brewed, were often run as a combo, by a husband and wife team.  He would bake, she would brew.

Read more about medieval food and so much in my ebook, Positively Medieval:  Life and Society in the Middle Ages, available on Amazon and other ebook platforms. 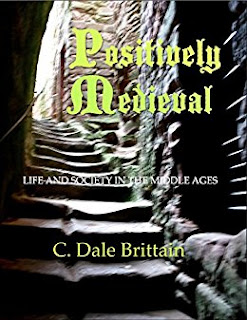