The Holy Hanky of Cadouin

The monastery of Cadouin, founded in the twelfth century in southwestern France, had and still has the Holy Hanky.  (Its official name is the Saint-Suaire.  It means Holy Hanky.)  Discredited as a genuine relic since the 1930s, it is a very interesting example of how relics were seen and used in the Middle Ages. 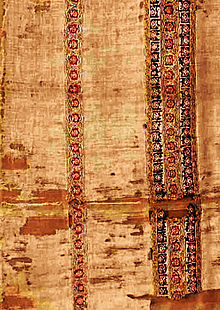 Here's a picture of it.  The story is that it was a handkerchief used to wipe the sweat from Christ's brow as he carried the cross on the way to his crucifixion.  Shortly after the year 1100, when the French had just conquered Jerusalem during the First Crusade, the pope's representative on the crusade, the bishop of Le Puy, picked it up in Mustafa's House O' Relics.

(Okay, there wasn't really a Mustafa's House O' Relics, with a certificate of authenticity bearing the genuine facsimile signature of Jesus H. Christ.  But close.  The rest of it's real.)

The bishop sent the precious relic, which he said had protected him in battle, home to his cathedral of Le Puy.  But the cathedral canons frankly didn't believe the story of the priest whom the bishop had commissioned to take it there.  Medieval people were by no means ready to believe in every relic someone presented to them.  The priest ended up in the newly-founded monastery of Cadouin instead, along with the Holy Hanky.  (It's not clear what the bishop's reaction was when he found out what had happened to his relic.)

This small, out of the way monastery quickly became a place of pilgrimage.  People flocked to see something so holy, a physical connection to the redemptive suffering of Christ.  It was widely considered to perform miracles.  Its authenticity was considered proven by the miracles it worked.  And why should we say it didn't?  We weren't there.  It inspired gifts to the monastery from such notable people as Eleanor of Aquitaine.

Over the centuries it continued to be revered.  When France went officially atheistic during the French Revolution and both monks and relics were tossed out in the street, the mayor of the village of Cadouin took the Holy Hanky and hid it under his floorboards, until Catholicism was reestablished.

It continued to receive attention and have miracles attributed to it until the priests of Cadouin unwisely decided in 1934 to prove scientifically that it was authentically from the first century AD.  The first thing to turn up was that what they had always assumed to be a decorative border was actually Arabic writing, saying, "Allah akbar!  There is no God but Allah and Mohammed is his prophet."  Oops.

Things went downhill from there.  It's now been determined to have been woven in Egypt shortly before the pope's representative got it.  On the up side, it is one of very few surviving pieces of Egyptian cloth from that period in such nice condition.

Today in Cadouin there is a chain hanging above the altar, where the reliquary with the Holy Hanky used to hang.  There is a display comparing it to the Shroud of Turin (also now known not to be from the time of the crucifixion), discussing how the true source of miracles is not a piece of cloth but God's response to piety and prayer, which may be inspired by almost anything, including an Egyptian handkerchief.

For more on medieval religion, see my ebook Positively Medieval, available on Amazon and other ebook platforms.