Being an independent publisher, an "indie," has become more and more common in the last decade.  More books, especially ebooks (as opposed to physical books), are now being published by indie authors than by traditional publishing houses.

Traditional publishing houses long functioned as "gatekeepers," publishing only books that they thought were good and that they thought would sell (not necessarily congruent categories).  Everyone heard stories of authors, from JK Rowling to the Bridges of Madison County guy, who were turned down by multiple publishers before hitting it big.  This is because guessing what was going to sell, as well as interjecting one's own taste into decisions about what's good, has always been an inexact science.

So now there are no gatekeepers for indie authors!  Good books can find their readers without anyone else deciding what they'd like!  Or that's the idea.  It doesn't quite work out that way.

It doesn't because of all the things the traditional publishers have always provided that a lot of indie authors can't manage on their own.  They gave books a good editing, to eliminate typos and misspellings (or at least most of them), and to make sure that the heroine didn't have blue eyes in Chapter 1 but brown eyes in Chapter 6, or that the hero didn't overhear all the details of the nefarious plot in Chapter 4, only to be shocked when he "first" hears about it in Chapter 14.

Traditional publishers always gave books attractive, genre-appropriate covers.  One has heard the saying, "Don't judge a book by its cover," but when there are many books to choose from, the one with the intriguing cover gets picked up first.  A cover with a slightly blurry photo of a backyard bird feeder is not going to sell many romance novels, even if in the story Judy and Jason first meet while buying bird seed.  A drawing of a sailboat is not going to inspire lovers of horror novels to pick up the book, even if the Undead Being manifests itself in a boathouse.  And don't get me started on the picture of Mommy and Daddy drawn by a six-year-old.

Here is the cover of my first published fantasy novel, "A Bad Spell in Yurt." It looks like a fantasy cover, and it looks like fun, and it helped make the book a national fantasy best-seller.  I had nothing to do with creating the cover--it was my publisher.  The artist is Tom Kidd. 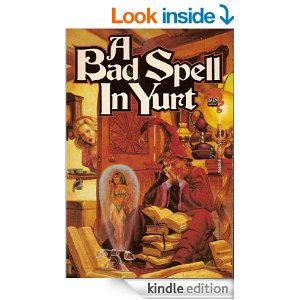 The other thing traditional publishers have always provided is marketing.  No matter how good a book is, no one will buy it if no one knows it exists.  Publishers were good at getting books into stores, getting them reviewed in major newspapers and magazines, even getting the authors on radio or TV shows.  A lot of indie authors are shocked to discover that writing a good book is only Step One.  That's why it's called indie publishing--they have to be publishers as well as authors.

(In my own case, the eight books that I published traditionally gave me a fan base (we love you, fans!) that has continued into my indie publishing days, so I have a market for my new books, and people ready to recommend my old titles when I republish them.  Most indie authors aren't so lucky.)

The other thing challenging indie authors is how really bad some of the books being published are (as I hinted above), meaning some readers turn their noses up at self-published books.  So far no one has figured out how to install gatekeepers to keep out the sludge without, you know, instituting gatekeepers.

In spite of everything, some indie authors do very well.  One advantage they have is that there really is a market for books almost (but not quite) like best-sellers.  So traditional publishers wouldn't touch stories of teenage romance with a handsome young vampire after Twilight, but a lot of readers wanted such stories, and indie authors provided them.  Traditional publishers were dubious about more stories of a rag-tag group of men, elves, and dwarves off to conquer the Dark Lord, in spite of the success of Lord of the Rings, but indie authors have filled that need.  Harry Potter pretty much exhausted traditional publishers' interest in stories of wizardry schools (though my Bad Spell had a wizards' school long before Harry Potter appeared), but now anyone who wants such a story can find it.

The most popular indie genres are contemporary romance and soft-core erotica.  In both cases, readers are voracious, and a skilled and prolific indie author can keep cranking out books that will sell.  To get their books noticed, of course, they work more than a full-time job (there's a reason a traditional publishing house has dozens or more employees).  Realistically most indie authors will only sell one or two copies ever, including the sale to Mom.  There are plenty of sites on the web that will, "for a small fee," tell you how to make Big Bucks in Passive Income by being an indie publisher.  Do not believe them.  (Though they seem to be making plenty of Big Bucks themselves.)

Some skilled and fortunate (and very hard-working) indie authors gross seven-figure incomes (though they have to pay for covers and editors and advertising out of that).  They are however a tiny fraction of all indie authors.  That hasn't slowed a lot of would-be Bigtime Authors down.  They figure that less than 1% of the US population has died of Covid-19, so they aren't going to worry, yet on the other hand far less than 1% of all indie authors become rich, so they figure, That's me!  Sorry, it doesn't work that way.

Writing a book, finishing it, making it the best you can, successfully formatting and publishing it has got to be its own reward.  Selling copies to strangers who like it is gravy.