Everyone has heard of the Black Death, which sounds very scary, and so it should.  It's often associated  with the Middle Ages, but in fact there were only two medieval outbreaks, one in the sixth century and one in the fourteenth, that is at the beginning and end of the Middle Ages.

In both cases, the Black Death came out of central Asia (it also devastated China).  It's a bacterial disease, spread especially by fleas.  In both of its medieval manifestations, the bacteria seem to have mutated into a particularly virulent form, that then spread rapidly, especially in an urban environment where people lived close together, and where rats could serve as hosts for the fleas.  A city could be fine one day, and two weeks later three-quarters of the population would be dead.

In the sixth century, this disease broke down Roman urban culture, which did not recover until the eleventh and twelfth centuries (see my post on the medieval city).  In the fourteenth century, the Black Death marks the beginning of the Renaissance, a time when people turned to art because the economy had tanked.  (The first work of Renaissance art was a piece of literature, Boccaccio's Decameron, about people fleeing the plague.)

In both cases, the impact was devastating.  We know more about the fourteenth century than the sixth, and it's quite horrifying.  An infected ship from the Middle East came into Genoa harbor in 1346, with almost all the sailors dead, and from there one can map the spread of the disease like ripples on a pond.  Probably between a quarter and half of Europe's population died, especially in the cities.

People fled to try to escape, not realizing they were probably already infected and were carrying the disease with them.  Realizing that the disease was carried on fleas, people killed cats and dogs—whose fleas just jumped on humans.

Sometimes you'll see the Black Death compared to AIDS, but it's really not comparable.  It was easy to catch, whereas AIDS is quite hard to catch, and it killed you very quickly, whereas many people now live with AIDS for years.  In practice, probably everyone in the fourteenth century caught at least a mild form of the plague, so one could survive, but at least a third of the population did not.

The worst passed off in a few years, but it tended to keep coming back every generation or so, as children were born who had not been exposed and thus had not developed immunity.  There was a very serious outbreak in England in 1666 (well after the end of the Middle Ages), which ended only with the Great London Fire, which burned up the rats and fleas along with much of the city.

In reaction to the Black Death, some people in the fourteenth century became very pious, multiplying prayers and rituals.  Others however adopted a hedonistic, live-for-today mentality, pointing out that priests had fled from the plague just as fast as anyone else.  Art became much more morbid, and many an expensive tomb featured stone carvings on two levels (almost like bunk beds)—on one level the deceased lay clothed, looking peacefully asleep, whereas on the other the deceased was carved as naked and half decayed.

There has been some debate among scholars about whether the Black Death was the same as the bubonic plague that is still found in the American Southwest and the Sierras.  The current consensus is that it was.  Fortunately, because it's a bacterial disease (and not nearly as virulent as in the fourteenth century), it can be cured with antibiotics. 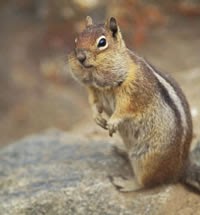 The chipmunks in the Sierras (actually golden-mantled ground squirrels, but they look like big chipmunks as you can see from the picture) carry the plague today.  No matter how cute they look, do not pat them.  And if you've been camping there and get home feeling funky, tell your doctor you have the plague (otherwise she'll probably test you for AIDS before thinking of the plague).

Click here for more on medieval views on death.

For more on medieval health and disease and other aspects of medieval history, see my ebook Positively Medieval, available on Amazon and other ebook platforms.