The Middle Ages did not have turkeys, for they are found only in the New World.  For a big feast, they might have a duck or a goose, however.  Many people kept flocks of geese, valued for their feathers, their eggs, and their meat.  In addition, hunting provided wild geese and ducks for the table, as well as sport.

When white men first reached the Americas, they were impressed at the large and tasty local fowl, especially the southwestern turkey.  Natives in what is now Latin America had domesticated them, just as Europeans had domesticated geese.  The Spanish took some home in the sixteenth century.

From Spain, they quickly spread throughout the rest of Europe.  There was some disagreement at the time as to where these big, exotic birds had come from.  The Turks had recently taken over Byzantium and much of the eastern end of the Mediterranean, and anything exotic was routinely ascribed to them.  Thus the British called these birds "turkey birds." 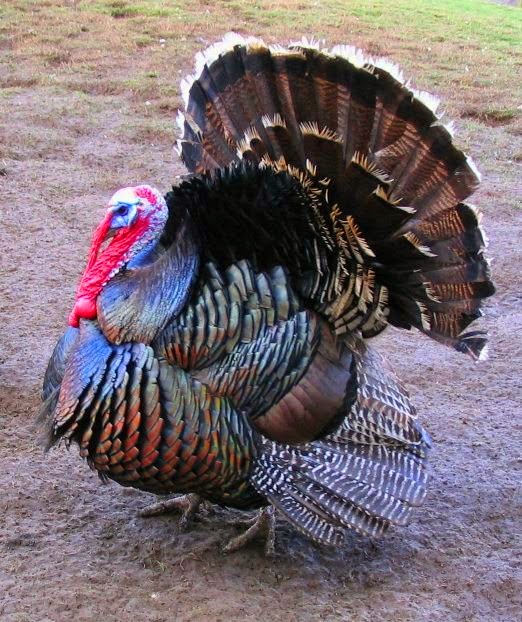 When a century later, in 1620, the Puritans left England, seeking a place where they could impose their religion on everyone in sight without any of that pesky Church of England, they brought turkeys with them in cages on the deck of the Mayflower.  Imagine their surprise when they reached New England (as of course they called it) and discovered a wild version of what they had assumed was exclusively a Middle Eastern bird.

They hunted wild turkeys but did not try to domesticate them, already having domestic turkeys.  In the following centuries, wild turkeys declined rapidly due to loss of habitat and over-hunting, although in recent years they have made a substantial comeback.  The domestic turkey, meanwhile, has become extremely stupid, so that it could never take care of itself in the wild--and, it is said, they have even lost the ability to breed unassisted, which must certainly be a sign of major debility.