What did medieval people grow in their gardens?  A glimpse into what was (at least) possible is provided by a document of Charlemagne, an order he issued around the year 800.  In this so-called "Capitulare de villis," he laid down guidelines for how royal manors were to be organized, including a stone manor house that had a special room for women serfs to weave cloth.  This "Capitulare" also included a list of plants he wanted every royal manor to grow.

(Here's a nineteenth-century statue of Charlemagne, located in the heart of Paris, claiming him for France rather than Germany.) 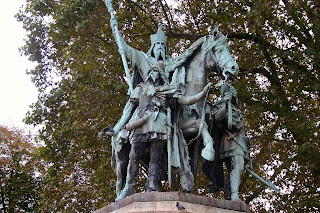 Now of course this was an aspirational list.  The fact that he ordered all his manors to grow these plants indicates that they weren't necessarily doing so already.  And one certainly cannot extrapolate from might have been ordered for a royal manor and what most people grew in their gardens.  But it is still a very interesting list.

Charlemagne wanted a lot of trees in his orchard, including apples, pears, cherries, plums, chestnuts, almonds, mulberries, persimmons, and quince.  He also specified nut trees, though not what kind of nut (other than the almonds).  Today we have a lot of different varieties of apple, and it was no different in the ninth century, except that instead of Granny Smith and Honeycrisp and Macintosh, the royal document listed, "gozmaringa, geroldinga, crevedella, spirauca, dulcis, and scriores."  If anyone wants "heritage" varieties of apple, maybe they should start figuring these out. 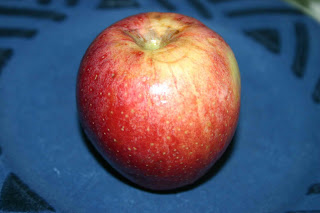 Charlemagne's garden was also supposed to grow a lot of herbs.  Spices like clove and peppercorns would have had to be brought in from southeast Asia at great expense, over thousands of miles, but herbs could be locally grown.  These included sage, fenugreek, rue, chickory, anise, caraway seeds, rosemary, parsley, coriander, mint, and rose madder (the latter used for dying).  Mixed in with the herbs were a number of plants that we would consider ornamental flowers, but which could be used in various botanical preparations.  These included lilies, roses, nasturtiums, iris, and gladiolas.

And then there were the vegetables.  These included peppers, cucumbers, zucchini, beets, radishes, fava beans, peas, lentils, cabbage, kohlrabi, turnips, parsnips, onions, leeks, and celery.   You will notice there were no potatoes or tomatoes or pumpkins, as these are all New World plants.  Nonetheless, there were plenty of vegetables to choose from, at least in the summer, and most of these will keep well in a dry place.  They tend from our point of view to look rather bland, which is why you needed to perk them up with some parsley or fenugreek or, if you could afford it, black pepper.

Some plants were listed with essentially the classical Latin name, like alium for onion, or pastenacas for parsnips.  Some had a name that can be figured out from French and German words, like the medieval Latin porros for leeks, which are poirreaux in modern French and porrhe in German (modern scientific name Allium porrum).  And then there were at least some plant names that made perfect sense in the ninth century but leave modern botanists scratching their heads.  For example, what was parduna, which appears between nasturtium and mint?  They obviously knew.

For more on real medieval food, see my new ebook, Positively Medieval: Life and Society in the Middle Ages.  Also available in paperback.