A Bad Spell in Yurt

Thirty years ago this summer, I published my first fantasy novel, A Bad Spell in Yurt.  I've been writing stories since I was in kindergarten, and I'd already published two scholarly books and a number of articles, but this was very exciting.  Fiction uses a different part of the brain than scholarship. 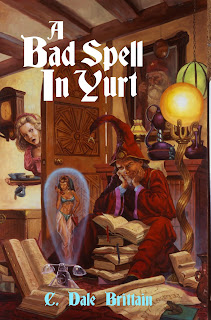 Yurt went on to be a national Science fiction/fantasy best-seller and is still my perennial best-seller.  Originally it was published as a mass-market (small size) paperback by Baen, a New York SF specialty publisher.  Its excellent sales meant that Baen was happy to publish the next four books in the series, as well as a couple of non-series books.  I had originally rejected the idea of a series, because the story was (and is) complete in itself, but my husband talked me into it.  I'm glad he did, because Daimbert, the wizard hero, is an excellent character and had lots more adventures ahead of him.  Also, fantasy readers like series.

In spite of Yurt's success, Baen became bored with me when each book did not sell more than the last one (their plan).  So I ended up publishing the sixth book in the series, Is This Apocalypse Necessary? the boffo finale, with a small press (Wooster Book Company).

Fast forward ten years.  The Yurt books were all out of print, so I started bringing them out as ebooks, first on Amazon for their Kindles, then at the other major ebook platforms, iTunes (now renamed iBooks), Nook (for Barnes & Noble), and Kobo.  A gratifyingly large number of new fans appeared!  Because a lot of them, including me, still prefer to read a physical book rather than read on a screen, I started bringing the books out in new editions in trade paperback (large size), mostly in omnibus volumes with more than one book per volume.

In addition, I decided that Daimbert had had a few other adventures I'd never written about, so I wrote three novellas (The Lost Girls and the Kobold, Below the Wizards' Tower, and A Long Way 'Til November) that took place in between the adventures in the six novels.  (They are also available in an omnibus volume of their own, called Third Time's a Charm).

Now I've taken the next step, and in honor of its thirtieth anniversary, I've brought the original Bad Spell out in hardcover!  It's what's sometimes called library binding, sturdy covers with the cover image printed on them, the same great Tom Kidd illustration that's been with the book from the beginning, rather than a monochrome cloth cover with a paper dustjacket.  Here's the link on Amazon.

And here's the opening to whet your appetite:

I was not a very good wizard.  But it was not a very big kingdom.  I assumed I was the only person to answer their ad, for in a short time I had a letter back from the king's constable, saying the job was mine if I still wanted it, and that I should report to take up the post of Royal Wizard in six weeks.

It took most of the six weeks to grow in my beard, and then I dyed it grey to make myself look older.  Two days before leaving for my kingdom, I went down to the emporium to buy a suitable wardrobe.

Of course at the emporium they knew all about us young wizards from the wizards' school.  They looked at us dubiously, took our money into the next room to make sure it stayed money even when we weren't there, and tended to count the items on the display racks in a rather conspicuous way.  But I knew the manager of the clothing department—he'd even helped me once pick out a Christmas present for my grandmother, which I think endeared me to him as much as to her.