The Customs of Lorris

As I have discussed earlier, medieval peasants were neither passive nor helpless creatures.  After all, they outnumbered the rest of the population by a considerable amount, and if they didn't grow the food, the lord would have to be out there himself behind the plow, or else the food didn't get grown.  Peasants were thus a valuable commodity, and at least some lords figured out that making them happy was usually preferable to beating and threatening.  Medieval peasants lived in conditions those of us in the twenty-first century West would find intolerable, but that didn't mean they could do nothing to help themselves.  There was plenty they could do short of revolting.

One of the most notable examples of peasant initiative in improving their position was the Customs of Lorris.  This was a blueprint for how a village might be organized, with the obligations of the peasants spelled out.  It started, as the name implies, in the village of Lorris, early in the twelfth century.  (Lorris is east of Olrleans in central France, in the Loire valley.  This is the bell tower on its medieval church.) 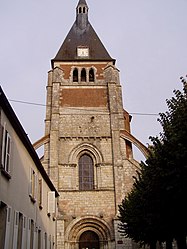 The local lord had granted a series of privileges to his peasants in what was called a "charter of liberty" or a "franchise," and he asked King Louis VI to confirm it, which he did.  The lord's purpose was to make the villagers happy, to attract new villagers to a territory that was being economically developed, and to get a steady revenue stream without having to hassle and badger the villagers of Lorris.  These Customs were then reaffirmed in the following generations by subsequent kings, and they were widely copied all over northern France.

From the peasants' point of view, the principal advantage was regular, predictable obligations, instead of arbitrary or capricious demands.  Each peasant family received a house in the village and sufficient land in the surrounding territory to raise their crops, and the family paid 6 pennies a year for this.  They had no labor dues, no unexpected demands for goods or services.  They could not be expected to join a military expedition unless it took them no more than a day away from home.  No tolls would be charged on peasants heading out of the village to take their crops to market.  The only extra tidbit the king threw in was that the village would have to provide food for the king and queen for up to two weeks a year if they stayed in Lorris.

But most of the Customs granted the peasants autonomy.  Every family in the village paid the same rent, which was unusual in the twelfth century, when there was a patchwork of different obligations, probably a further indication that Lorris was a newly planned and laid out settlement.  Families were free to sell their houses and land if they wished and leave; clearly the lord of Lorris did not anticipate that many would want to.  Fines for various infractions were clearly specified, and it was stressed that no one would be imprisoned unless accused of a crime.

Overall, the Customs gave the villagers of Lorris, and the other villages where they were adopted, identity as citizens of a particular place, rather than just dependents of one lord or another.  Every indication is that they paid good money to their lord in return for the grant of these Customs.  Although the Customs in the form we now have them do not spell out the negotiations that led them to taking the form they now have, but there must have been considerable discussion for the lord to know what the peasants would agree to and what obligations they were willing to undertake.  The autonomy, the ability to determine ahead of time how much they were expected to produce, was from their point of view worth it.

For more on medieval peasants, see my ebook, Positively Medieval:  Life and Society in the Middle Ages.  Also available in paperback.